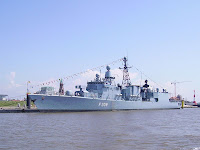 Sudanese and Somali pirates captured in the Gulf of Aden, as reported here:

The German navy detained nine people Tuesday following a dramatic action to head off a pirate attack on a German merchant vessel off the coast of Somalia. A tricky deliberation process has started in Germany, which has to decide how to legally proceed with the pirates.

This is the first time in the history of modern Germany's navy that anyone has been apprehended at sea.

According to German Defence Ministry in Berlin, a vessel owned by a Bremen-based shipping company, the MV Courier, was attacked by pirates during early morning Tuesday.

The ministry said that the pirates were armed with anti-tank rocket launchers and firearms.

US Navy helicopters thwarted the attack with soldiers of the German frigate Rheinland-Pfalz a short time later, seizing the pirate's boat and arresting nine people, the Defence Ministry said.

Some of the pirates were from Sudan, the ministry said.