"The Chinese trajectory there has changed in a somewhat more aggressive way in the past several years from what we had seen earlier," he said, specifically pointing to activity in the South China Sea. "They seem to be more ... military, aggressive, forward-pushing than we saw a couple of years before."

Blair said the debate is still open as to whether China's military power will be "used for good or for pushing people around."
***
Maples also said the Somali extremist group al-Shabaab is poised to formally merge with Al Qaeda, expanding the terrorist franchise in East Africa.

Maples said the propaganda released by both groups recently highlights their ideological similarities, suggesting a merger is forthcoming.

On the good news side, their testimony was that Iran probably doesn't yet have enough enriched uranium to make a weapon.

UPDATE: Some readers may find this post on Asian Sea Lines of Communication (SLOCs) a good refresher. Image stressing importance of Southeast Asia Sea Lanes from Maritime Economic Interests & the Sea Lines of Communication Through the South China Sea by Noer and Gregory. A Reuters analysis of the disputed maritime borders of the South China Sea here. 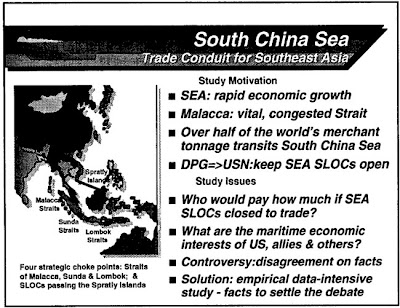