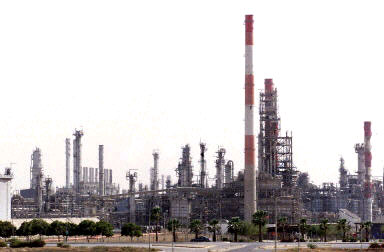 Saudi security forces have foiled an apparent suicide car bomb attack on a major oil production facility in the eastern town of Abqaiq, reports say.
At least two cars carrying explosives were fired on at the plant, Saudi officials have said.

The al-Qaeda network on the Arabian Peninsula has long called for attacks on Saudi oil installations.

About two-thirds of Saudi Arabia's oil is processed at the Abqaiq plant, one of the largest in the world.

Oil security analysts have estimated that a serious attack on the Abqaiq facility could halve Saudi exports for up to a year.

Suicide bombers in explosives-laden cars attempted to attack an oil processing facility that handles about two-thirds of Saudi Arabia's petroleum output on Friday, but were stopped when guards opened fire on them, causing the cars to explode, officials said.

The Saudi oil minister said the blast "did not affect operations" at the Abqayq facility, denying an earlier report on Al-Arabiya television that the flow of oil was halted briefly.

The facility "continued to operate normally. Export operations continued in full," the minister, Ali Naimi, said in a statement.

How big is the refinery? Well, very bighttp://www.eia.doe.gov/emeu/cabs/saudi.html:

Most of Saudi Arabia's crude oil is exported from the Persian Gulf via the huge Abqaiq processing facility, which handles around two-thirds or so of the country's oil output. Saudi Arabia's primary oil export terminals are located at Ras Tanura (6 million bbl/d capacity; the world's largest offshore oil loading facility) and Ras al-Ju'aymah (3 million bbl/d) on the Persian Gulf, plus Yanbu (as high as 5 million bbl/d) on the Red Sea. Combined, these terminals appear capable of handling around 14 million bbl/d, around 3.0-3.5 million bbl/d higher than Saudi crude oil production capacity (10.5-11.0 million bbl/d), and about 4 million bbl/d in excess of Saudi crude oil production during the first half of 2005. Despite this excess capacity, there have been reports that the Saudis are planning to conduct a feasibility study on construction of an oil pipeline from the Empty Quarter of southeastern Saudi Arabia through the Hadramaut in Yemen to the Arabian Sea.

I suspect security will be tightened at these export terminals and along pipelines in a hurry.

A USA Today report says that Matthew Simmons, a Houston-based investment banker who specializes in oil and gas ventures, said that he was alarmed by the light security at Saudi Arabia's massive Abqaiq oil processing plant.

To cripple the Saudi oil network, "All you'd need to do would be to get a big fire raging at Abqaiq," Simmons says. "It's got a chain-link fence around it. Chain-link fences aren't exactly the Maginot Line."

Well, they didn't have to be, did they? The "best" protection is a watchful eye...