In other words, not only is the New York Times, by publishing this photograph -- publishing it in quite large size in the paper edition, by the way -- giving the terrorists the opportunity to give emotional punch and credibility to their threats that they would not otherwise have, the Times' representative is apparently the one who staged the text they are using to begin with. This is not a photograph of a historic event or a text that teaches us about the group because they provided it. This is a staged photograph of a group of people, but the terrorists are staged in such a way as to showcase the fact that they pose a threat to their hostage. Thus the Times creates for them the chance to publicize their threat, a chance they would not otherwise have, and a critical chance. I was originally going to criticize the Times for making the decision to publish the photograph, which gives their threat legitimacy, but in fact the Times complicity here goes far deeper.

The subject of her perfectly correct outrage: 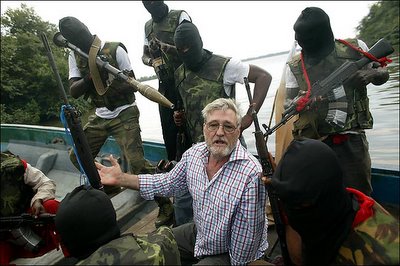 Macon Hawkins of Kosciusko, Tex., an employee of a pipe-laying company, is a hostage of the Movement for the Emancipation of the Niger Delta.

Large portions of the Nigerian population may, in fact, have legitimate complaints over the manner in which the oil and gas wealth their country is being exploited, stolen, sold and much more. But this sort of coverage of a staged event* provides proof to would-be terrorists that outrageous acts can provide a forum for their complaints. Next time, when a NY Times reporter is grabbed and weapons pointed, I wonder if the Times will be so thoughtless.

Meanwhile, I suggest some prayers for Mr. Hawkins, who is apparently to the NY Times just grist for their mill.

*How do we know it's staged? Among other reasons, only an idiot (the masked man on the left) would point an RPG at a hostage in real life- especially at such close range.
Posted by Mark Tempest at 2/27/2006 11:08:00 AM