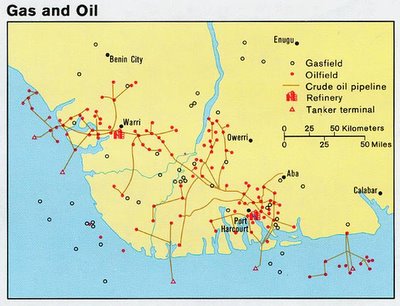 Oil rose the most in a month in New York as Nigerian rebels threatened more attacks after cutting output from Africa's largest producer by about 20 percent.

Royal Dutch Shell Plc closed 455,000 barrels a day of production after militants began a series of attacks on oil facilities and kidnapped nine foreign workers three days ago. The rebels blew up a pipeline yesterday. New York futures, which didn't trade on Monday, also rose because talks in Moscow failed to resolve the dispute over Iran's nuclear program.

``The difference between now and previous attacks is that this looks a little bit better organized,'' said David Thurtell, commodity strategist at Commonwealth Bank of Australia Ltd. in Sydney. ``If the Iran issue escalates, I guess we could get to the $70 mark pretty easily.''

Earlier reports on "total war" of Nigerian rebelshere, here, and hereand at the links therein. And for Nigeria's place in the US import totals here. Map above is of oil and gas areas of Nigeria.