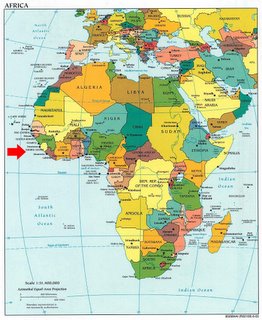 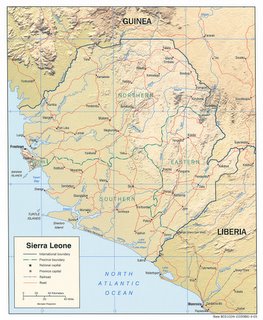 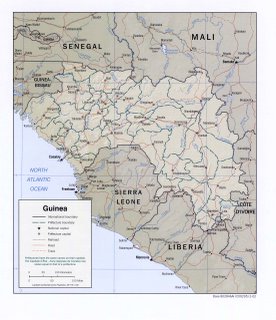 As Guinean pirates continue to cause havoc at sea in Sierra Leone’s territorial waters, reports monitored by this press have so far indicated that the Sierra Leone Navy (SLN), an arm of the Republic of Sierra Leone Armed Forces (RSLAF), has put certain anti pirate and other anti terrorist measures in place with a view to protecting and safeguarding the territorial integrity of the country.

This latest move in this regard bore fruit, when on Friday, January 27 2006 a team of Sierra Leone Navy personnel quashed an attempted sea piracy at the Yeliboya Forward Operational Base (FOB) by a group of 14 Guinean pirates and ending with the capture of one of the said pirates.

Judging by the last two paragraph in the article, Guinea and Sierra Leone seem to be having some difficulties:

Meanwhile, the captured pirate, who gave his name as Abdul Karim Sillah, has been turned over to the police for further interrogation. This latest capture amounts to two such Guinea pirates that have been apprehended by the Sierra Leone Navy in the last two months. Both captured pirates claim to be registered vigilantees of the Guinean Armed Forces (GAF).

The spate of Guinean pirates illegally encroaching in Sierra Leonean territorial waters to carry out criminal activities has been deemed by many as a real provocation. According to some observers, something must be done at the strategic level to put a decisive stop to this persistent provocation.