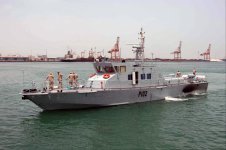 The Iraqi navy consists of two squadrons — a patrol boat squadron and an assault boat squadron. It also includes one marine battalion, which serves both squadrons.

The assault boat squadron has 24 fast assault boats that routinely patrol the inland waters and approaches of the Kwar Abd Allah up to the port of Umm Qasr which is Iraq’s largest and only deep water port.

According to Price, both have seen tactical successes in combating smuggling and piracy as well as conducting a couple of successful rescues at sea for injured mariners.

“Incidents of piracy have continuously declined since the Iraqi Navy began 24/7 presence operations in the [Kwar Abd Allah] and their territorial waters,” Price said.

“Last July, merchant ships were afraid to come into our port due to pirating, but that is no longer the case because our squadrons have been successfully patrolling the port,” Iraqi Navy Commodore Adel said.