US Navy asked to act as Somali "fishery patrol"

In a sort of logical follow-on to anti-piracy efforts off the Somali coast, the "Somali government" has asked for some help from the US Navy in keeping its coastal waters free of illegal fishermen, as reported here:

The powerless Somali transitional government has asked the US Navy, which last month arrested pirates in the country's coastline, to extend its patrols in the Indian Ocean and curb illegal fishing along its vast coastline.

The request came nearly a month after the US Navy's Fifth Fleet arrested 10 pirates who had attempted to hijack a merchant ship in Somali waters.

"Somalia is grateful for recent initiative taken by the United States Navy aimed at curtailing rampant sea piracy that has been taking place in the territorial waters of Somalia," Fisheries and Marine Resources Minister Hassan Abshir Farah said in a statement Sunday.

"But it will also be pleased if similar action could be taken against illegal fisheries in the Somali territorial waters. The illegal international fishing vessels cause serious damage to Somali marine resources and its environment," he said.

Farah said curbing piracy and illegal fishing could be beneficial to the impoverished Horn of African nation of about 10 million people that has been wracked by lawlessness since 1991.

"As Somalia's coastline is one of the busiest shipping lanes in the world, curbing sea piracy and illegal fishing will not only be beneficial to the Somali people but also to the international community," he added.

The Somali government "is making every effort to address these serious problems of sea piracy and illegal fisheries in its coastal waters. Therefore, the government calls upon all the international community to join and support noble efforts being made by the United States," Farah said. 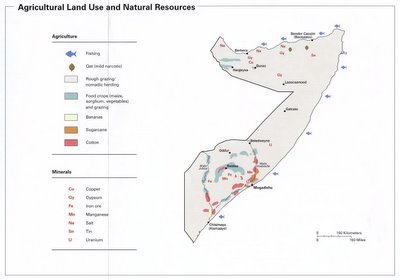 The map to the left shows the natural resources of Somalia, and fishing is one of the "biggies."

Back in November, 2005, I posted on the problem of fish poaching off the Somali coast and referred to this piece:

For many Somalis, especially marine experts and coastal dwellers, it all began when foreign fishing boats started invading the country's fishing grounds after the fall of the Somali government in the early 1990s. When the various rebel groups that had toppled the government failed to fill the vacuum and instead turned on each other, an opportunity arose for foreign vessels to invade the country's territorial waters and marine economic zone to fish for diverse species.

The unscrupulous foreigners were simply taking advantage of the confusion created by the civil war to catch whatever they wanted. Their vessels were widely reportedly to be using universally prohibited fishing equipment, including nets with very small mesh sizes and sophisticated underwater lighting systems to lure fish to their traps.

Somali coastal dwellers have been crying for help to stop this fishing for nearly a decade, but nothing has been done.

"Criticism of the illegal fishing came from the South West Indian Ocean Fisheries Commission (SWIOFC), a United Nations body, but its words were not backed by deeds, ending up having no effect," Mr Hayle added.

As to why the US ought to get involved, it seems, after several years of Somalia disintegration, that almost no one else gives a damn or has the capability of doing the job. I remain convinced that it job the UN, EU, NATO or some sort of African group ought to be handling since the sea lanes involved are not high priority to the US. On the other hand, since Somalia is perhaps the prime example of a failed state that needs help to participate in the global economy (a one state example of Barnett's "gap") - it may behoove the US to become the prime mover in organizing (and even paying for) the effort to reconnect Somalia. Some of the same logic that Thomas Barnett is talking about here. Further, it cuts a leg off the argument of the pirates that they are filling in to do what their ineffective "government" cannot do and undercuts the support of the warlords who use the "protection" of the local fishermen as a means of earning and maintaining support.

StrategyPage offers up a piece on the "pirate fishermen " of Somalia here.