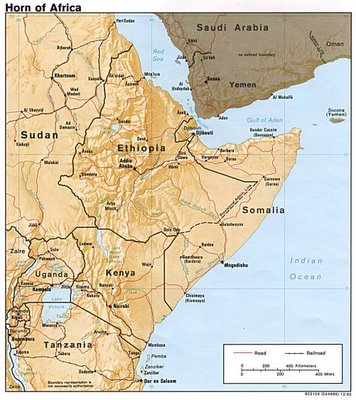 In the latest grim episode of asylum seekers and migrants dying while trying to cross the Gulf of Aden from Somalia to Yemen, the United Nations refugee agency reported today that smugglers forced 137 men, women and children into deep waters off the Yemeni coast, killing at least 33, with another 30 missing.

"The latest tragic incident once again highlights the urgent need for joint international and local efforts to address this problem and minimize the flow of desperate people who fall victim to ruthless smugglers," UN High Commissioner for Refugees (UNHCR) spokesperson Jennifer Pagonis told a news briefing in Geneva.

Thousands of Somalis, many fleeing violence in their homeland, arrive in Yemen every year, averaging an estimated 100 people a day during the annual September to March period of good sailing conditions, after making the perilous crossing in the hands of smugglers who often beat them or force them overboard while still far from shore, sometimes with their hands tied behind their backs, leaving them to the mercy of the seas.

This sort of thing has been going on a long time in a variety of areas (including the US Southwest deserts) as people in one God-forsaken place make every effort to get out --even with improbably high odds against success. The smugglers, if caught, should "enjoy" the same treatment as their victims.

How bad are things in Somalia? Well, in addition to a food shortage that cannot be mitigated because of the pirates seizing World Food Program shipping, overland routes that also difficult and also dangerous, there is major drought so bad that animals are competing with humans for water as reported here:

Reports of baboons and hyenas attacking communities in drought-stricken Somalia are becoming common. The wild creatures are said to be locked in competition with human beings in search of water as the merciless drought currently affecting the entire Horn of Africa region exhausts both food and water supplies.

In Tayeglow district in Bakol region, southern Somalia, a vicious attack by baboons led to the deaths of several animals and injury to some pastoralists when a war for water broke out.

Ravenous hyenas, capable of breaking a camel's neck with one snap of their strong jaws, often attack in broad daylight. It is a fight for survival as drought takes its toll on communities in various regions, especially in southern and central Somalia.

Desperation is even reported from riverine areas. Lorry drivers and conductors have begun complaining of herds of monkeys positioning themselves at strategic road intersections or on bridges to raid lorries with loads of fruits destined for markets in Mogadishu.

The sight of animals making off with bunches of bananas or 10kg watermelons is common, to the annoyance of horticultural traders whose profits are dwindling due to scarcity of commodities. "The road section between Shalambood and Afgoye towns in Lower Shabelle region, south of Mogadishu, is the worst," complained Ali Hashi Damal, a young conductor.

In rural areas, carcasses of dead animals are a common sight, while villagers complain of putrefying dead animals causing a health hazard to those who still keep some grains for survival.

The scorching sun, a dusty environment and heightened population mobility are already worsening the magnitude of the starvation.

The more physically fit are fleeing famine-hit areas for urban centres, adversely affecting those who remain behind - the sick, the elderly, children and mothers being the prime victims...

...rious good samaritans have also been trying their best to reach the needy. Their efforts are however hampered by internal hostilities between Somalis. Moreover, food supplies arriving at the harbours have to be transported inland by lorries over potholed and badly damaged roads; the vast country does not even have a railway system.

Trucks carrying relief items generally take days, if not weeks, to reach their destinations. The situation is worsened by armed groups along the route who often hold the trucks to ransom.

Until recently, the logistical problems were limited to inland areas, but recently sea pirates around Somalia's waters have begun attacking vessels. They don't care if the ships contain commercial goods or relief items. Once they get hold of the crew, they demand a ransom.

- The forecast for the ‘gu’ rains is not promising (March – May). The number of food aid beneficiaries could increase significantly if the rains are poor.
- Water shortage reaching critical levels with 640,000 people requiring emergency water in Somali Region and 100,000 in Borena.
...The Disaster Preparedness and Prevention Agency (DPPA) continues to dispatch emergency food aid for 1.5 million people in Somali Region and for 155,000 beneficiaries in Borena zone of Oromiya Region. WFP is providing a full food basket and supplementary food for 35 percent of beneficiaries regarded as the most vulnerable groups. The DPPA has sent a multi-sectoral assessment team (MoWR, MoH, MoARD) to Jijiga, Liben, Afer and Gode in Somali Region to jointly monitor the situation. However, the humanitarian crisis in Borena zone has not yet adequately captured the attention of humanitarian partners at all levels. This is mainly due to poor capacity of the zone to manage the crisis, including prioritising the needs and sharing information timely. There is a strong fear that massive death of animals could occur in the coming few weeks. Sectoral taskforces have quantified their respective emergency needs; however, to date, there is no consolidated emergency need.