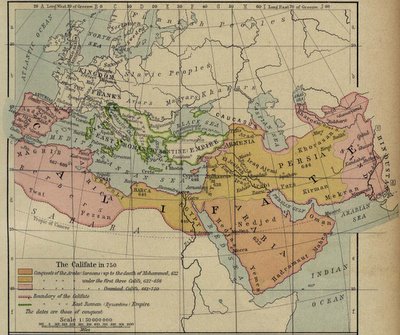 Refreshing reminder that some people in the right places are capable of assuming that when Osama bin Laden says he wants to reestablish the "caliphate" he ought to be taken a face value here:

The recently released Quadrennial Defense Review, which reveals long-term military planning, shows a top brass worried about the ideology of hate preached by imams across the Islamic world. This ideology, though twisted, is somewhat coherent and calls for using terrorism to create a "caliphate," a unified Islamic state, stretching from Afghanistan and Iran all the way to Spain and including most of North Africa. For a lack of a better term, some American military planners call this ideology "bin Ladenism."

Gen. Douglas Lute, director of operations for U.S. Central Command (which oversees U.S. forces in the Middle East), dropped by the offices of The Wall Street Journal recently. He noted that bin Ladenism has deep roots in many Islamic countries and that bin Laden isn't the only terrorist leader trying to appeal to populations oppressed by dictators. There are some 18 terrorist organizations that are part of what the military calls al Qaeda and Affiliated Movement. The military, he said, even has an acronym for it: AQAM.

To counter bin Ladenism, the military is planning a two-stage war. The first is being fought in open battles in Afghanistan, Iraq and elsewhere and looks a lot like the kind of war most Americans assumed we'd wage on al Qaeda and terror-sponsoring states after the Sept. 11 attacks. The second stage is what senior military planners--including Mr. Rumsfeld--call "the Long War." It involves countering one set of ideas with another.

It occcurs to me, as I am re-re-reading Eric Hoffer's The True Believer, that OBL has the vision thing working for him- the "caliphate" will not build up the individual downtrodden Islamisist, but will create the world of "equality" among the masses that Hoffer writes of as being an aspiration of those masses (their motto might be:"If I can't be great, let me be part of a movement to bring others down to my level"- though, of course couched in much more inspiring terms ("Death to the Great Satan" "Death to America" - or "Restore the Capliphate and be part of something great you otherwise pitiful loser"). As Hoffer put it:

Passionate hatred can give meaning and purpose to an empty life. Thus people haunted by the purposelessness of their lives try to find a new content not only by dedicating themselves to a holy cause but also by nursing a fanatical grievance. A mass movement offers them unlimited opportunities for both.
Section 75, The True Believer

If the Pentagon plans are to improve the lot of the masses and help them become part of the Thomas Barnett "functioning core", then full speed ahead, I say. It may be the only way to cut OBL's legs out from under him.

UPDATE: Of course. this is not helping. It simply feeds the notion of the fanatics that they are being held down. Thanks, Crazy Uncle Al.