Greenpeace ship is locked down 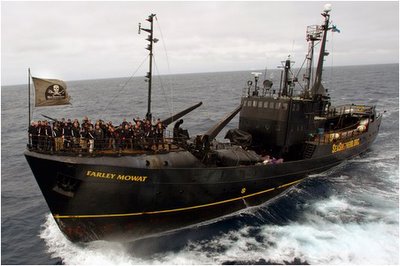 As Nelson from the Simpsons would say -"Ha Ha!" because the law seems to be catching up with Greenpeace's anti-whaling pirates as reported here:

The chained Farley Mowat floats under police guard in Cape Town harbor, out of reach of the whaling ships its captain seeks to destroy.

For seven weeks, the crew of the tiny activist ship harassed Japanese whalers in Antarctic waters, chasing the hunters through thousands of kilometers of icy seas.

Now, the Canadian-registered ship has been forced to rest.

Last month, it was detained on arrival in South Africa by marine officials who say it does not meet safety requirements.

Let's see... people who admit they break the law for a "higher calling" complain of a "conspiracy" against them when the law is (partially) enforced against them. Must be some word that covers that situation...
Posted by Mark Tempest at 2/16/2006 03:48:00 PM