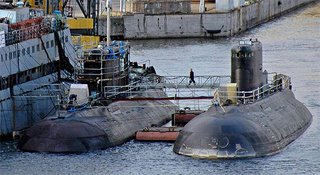 As reported here, India's Navy is keeping an eye on China's fleet:

Keeping as it does a watchful eye on the rapidly-modernising Chinese Navy, the Indian Navy has detected, tracked and photographed three spanking new Chinese submarines in the Mediterranean region.

This is the second such instance of remarkable long-range maritime snooping by the Navy this year. Its TU-142M and IL-38 maritime surveillance aircraft had "spooked" a new Chinese destroyer off Yemen's Socotra Island, almost 2,300-km away from the Indian mainland, as was reported by TOI in February.

This time, four of its warships — destroyer INS Mysore, guided missile frigates INS Brahmaputra and INS Betwa and tanker INS Aditya — came across the three submarines being transported on board two carrier "mother" ships transversing through the Suez Canal and Red Sea earlier this month.

"These three Kilo-class submarines, armed with the latest Klub-S cruise missiles, are the last batch of the eight contracted by China from Russia in a $2-billion deal in 2002," said a top source. "The helicopters aboard our warships clicked their photographs with remarkable clarity. The first five submarines were delivered by the end of 2005.

China, incidentally, had also procured four Kilo-class submarines from Russia in the mid-1990s," he added.

More on China's Kilos here. And here. India has ten Kilo class submarines of its own- Sindhughosh class. Klub cruise missile info here.
Posted by Mark Tempest at 7/01/2006 10:48:00 AM