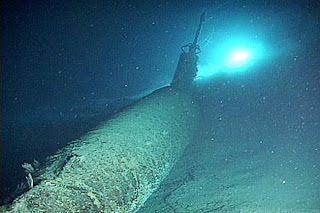 The bodies of two Japanese sailors who attacked Sydney harbour during World War II are to be left in their wrecked submarine, Australian officials say.

Katsuhisa Ban and Mamoru Ashibe crewed one of three mini-submarines that infiltrated the harbour in May 1942.

Australian officials will present a jar of sand from the site of the wreck to the families of the two men.

The government has also declared the location of the mini-submarine, 50km (31 miles) off the coast, a historic site.

The attack was part of an operation aimed at disrupting US and Australian shipping at the height of the war.


I would like to take home an article left by my brother or even a broken piece of the top of the sub, then it would mean my brother came home
Itsuo Ashibe,
brother of Mamoru

They failed to do this, but one of their torpedoes hit the Australian naval vessel HMAS Kuttabul. Nineteen Australian sailors and two Britons were killed.

Two of the submarines were damaged during the attack, and then scuttled by their crews.

But the third remained unaccounted for until amateur divers found it on the ocean floor in November last year.
***
Salvaging the vessel has been ruled out on grounds of cost and difficulty, but Environment Minister Malcolm Turnbull said that the government would look after the wreck.

"We are committed to ensuring this internationally significant wreck is protected and treated with honour and respect," he said.