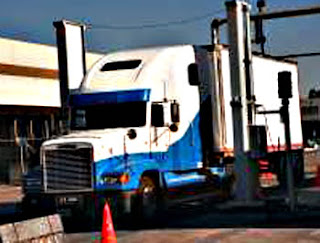 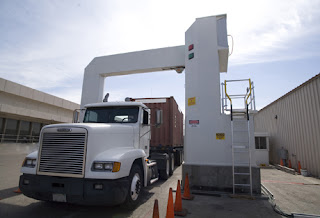 While U.S. ports scan about 5 percent of the containers moving over their docks, workers at the Port of Hong Kong use sophisticated radiation and gamma-ray screeners to peer into every single outgoing container at two of the port's busiest terminals.

"The approach was that if it could work in a port as busy as Hong Kong, it can work anywhere," said Jackie Wong, Hong Kong's top port security official.
***
On a recent misty morning inside a control room at Modern Terminals, a private company that runs one of Hong Kong's nine mega-terminals, security officials stood by a bank of flat-screen monitors overlooking a sea of containers. Every year, Modern Terminals moves the equivalent of 5.4 million 20-foot containers through Hong Kong, nearly three times as many as Charleston's terminals.

Outside, a truck hauling a maroon container rumbled through a portal that looked something like an X-ray machine you might see at a dental office, though much larger. The portal contained machines that used gamma rays to scan the inside of the container, while digital cameras captured images of the container's unique identification numbers.

The truck then rolled through a second portal that measured radiation levels. Inside the control room, images popped up on the monitors showing that this particular container held a car. All this data went into a bank of computer servers for storage.

The entire process took about 12 seconds.

"Every truck that comes through the main gate will come through here," said Ronald Cheng, security coordinator for Modern Terminals. "So now you can transfer all this information well before the ship arrives in the U.S. It's all done on real time."

Some clueless people, among whom is Senator Schumer, don't seem to understand that Hong Kong and other foreign ports are exactly the right place to have this technology:

As for scanning 100 percent of the nation's containers before they enter U.S. waters, a top customs official said in March that the concept is unproven and too expensive, "basically an impossible task" that's "unrealistic at this point in time."

Not everyone thinks so. In late March, a group called WakeUpWalMart.com (see here) began airing TV ads juxtaposing images of a nuclear explosion, Osama bin Laden and a container ship. The ad accuses Wal-Mart of putting America's security at risk by lobbying against the 100 percent scanning concept. Wal-Mart officials called the ads tasteless and said they don't oppose 100 percent scanning; they just don't believe the technology exists to do it efficiently.

Earlier this year, Democrats pushed for 100 percent scanning. One of the biggest cheerleaders was Sen. Charles Schumer of New York, who visited Hong Kong last year and testified in a hearing that, "Hong Kong is more advanced than any American port I've seen, and we should be ashamed they inspect every container and we don't." Republican lawmakers, buoyed by concerns from retailers, the U.S. Chamber of Commerce and shipping interests, opposed Schumer's push, and the issue petered out in the Senate several weeks ago.

Look, the point is to screen containers before they are put on a ship bound for the U.S. If the Hong Kong project works, as does ship monitoring, then there is no reason to have to rescreen all these containers as they enter the U.S. Schumer should be ashamed that he's so clueless, as should the reporter who got this story wrong. As noted in an earlier post, what has been said by the Homeland Security people and Wal-Mart is:

Some say America's best chance at preventing terrorists from sneaking bombs into the ports is to require all cargo containers to go through radiation and imaging detection equipment overseas. Just two weeks ago, U.S. Sen. Robert Menendez (D-N.J.) convinced his colleagues to amend their 9/11 Commission Bill to require the Department of Homeland Security to come up with a plan for 100 percent scanning.

But others, including Homeland Security Secretary Michael Chertoff, have advised against prematurely making a commitment to scanning all cargo at foreign ports. They have argued that America ought to wait for the results from a pilot project starting this year at several foreign ports before setting deadlines for scanning all containers.

Wal-Mart, along with the Retail Industry Leaders Association, say they support 100 percent scanning "in concept," according to Traynhman.

"But it's our understanding that the technology is not ready," he said.

If the SAIC systems is ready, so much the better, but the screening should be done offshore, not in our ports.