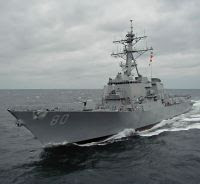 Maybe I missed something, but I'm a little confused about how this is an "anti-terrorist" exercise:

The North Atlantic Treaty Organization (NATO) is to stage an anti-terrorist military demonstration on Wednesday in a naval base of Taranto, Italy.

The event, under NATO's jargon of "NAC-MC Sea Day," is to test the level of interoperationality between NATO naval forces and NATO's capacity of fighting international terrorism in the Mediterranean Sea.
***
The event will be conducted in Italian exercise areas within the Gulf of Taranto. The leaders will embark in Flag Ship USS Roosevelt to watch the show of various military operations.

Lieutenant Babis Bozoutsidis, a press officer for the event, told Xinhua that the military demonstration will include anti- submarine operations, air-defense exercises and inspection of suspect vessels.

Does NATO know more than they're telling?

And the USS Roosevelt in question is probably not the carrier Theodore, which was last seen in Norfolk "undergoing a Docked Planned Incremental Availability in Norfolk Naval Shipyard." More likely USS Roosevelt(DDG 80).
Posted by Mark Tempest at 5/23/2007 03:51:00 PM