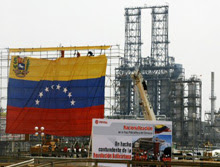 Reported as Takeover of oil fields in Venezuela is complete, though there's more to the story:

Newly bought Russian-made fighter jets streaked through the sky as Chavez shouted "Down with the U.S. empire!" to thousands of red-clad oil workers, calling the state takeover a historic victory for Venezuela after years of U.S.-backed corporate exploitation.

"The nationalization of Venezuela's oil is now for real," said Chavez, who declared that for Venezuela to be a socialist state it must have control over its natural resources.
***
While the state takeover had been planned for some time, BP, ConocoPhillips, Exxon Mobil, Chevron, France's Total and Norway's Statoil remain locked in a struggle with the Chavez government over the terms and conditions under which they will be allowed to stay on as minority partners.

Analysts say the companies have leverage because the state oil company, Petróleos de Venezuela, cannot transform the Orinoco's tarlike crude into marketable oil without their investment and experience.