Sunday Ship History: The Navy Hymn and a little more 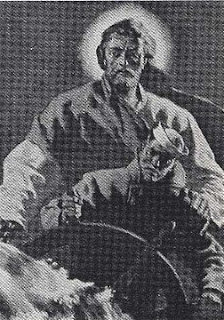 The original words were written as a hymn by a schoolmaster and clergyman of the Church of England, the Rev. William Whiting. Rev. Whiting (1825-1878) resided on the English coast near the sea and had once survived a furious storm in the Mediterranean. His experiences inspired him to pen the ode, "Eternal Father, Strong to Save."
***
In the United States, in 1879 the late Rear Adm. Charles Jackson Train, an 1865 graduate of the United States Naval Academy at Annapolis was a lieutenant commander stationed at the Academy in charge of the Midshipman Choir. In that year, Lt. Comdr. Train inaugurated the present practice of concluding each Sunday's Divine Services at the Academy with the singing of the first verse of this hymn.

The Episcopal version of the hymn with added verses:

Eternal Father, Strong to save,
Whose arm hath bound the restless wave,
Who bid'st the mighty Ocean deep
Its own appointed limits keep;
O hear us when we cry to thee,
for those in peril on the sea.

O Christ, the Lord of hill and plain
O'er which our traffic runs amain,
by mountain pass or valley low,
Wherever Lord thy brethren go;
Protect them by Thy guardian hand
From every peril on the land.

O Spirit, Whom the Father send
To spread abroad the Firmament;
O wind of heaven, by Thy Might,
Save all who dare the eagle's flight;
And keep them by Thy watchful care
From every peril in the air.

Changes occur, as verses are modified to meet modern life:

What some might call the "Naval Aviation version" is a follows:

Lord, guard and guide the men who fly
Through the great spaces in the sky,
Be with them always in the air,
In dark'ning storms or sunlight fair.
O, Hear us when we lift our prayer,
For those in peril in the air.

This version, together with the original first verse are the verses sung by the men and women of the Navy, particularly those in Naval Aviation.

Not surprisingly, the Coast Guard has its own hymn, though it shares the music with the Navy:

Eternal Father, Lord of Hosts
Watch o'er the ones who guard our coasts
Protect them from the raging seas
And give them light and life and peace.
Grant them from thy great throne above
The shield and shelter of thy love.
Lord, guard and guide the ones who fly
Through the great spaces in the sky
Be with them always in the air,
In darken storms or sunlight fair,
Oh, hear us when we lift our prayer,
For those in peril in the air!
Grant to them Your eternal peace, Oh Lord,
For they have followed your commandment,
That No Greater Love has he, who would give up his life for another.

The oldest of the hymns is that belonging to the Marines:

From the Halls of Montezuma
To the Shores of Tripoli;
We fight our country's battles
In the air, on land and sea;
First to fight for right and freedom
And to keep our honor clean;
We are proud to claim the title
of United States Marine.

Our flag's unfurled to every breeze
From dawn to setting sun;
We have fought in ev'ry clime and place
Where we could take a gun;
In the snow of far-off Northern lands
And in sunny tropic scenes;
You will find us always on the job--
The United States Marines. Marines raising the flag at Iwo Jima

Here's health to you and to our Corps
Which we are proud to serve
In many a strife we've fought for life
And never lost our nerve;
If the Army and the Navy
Ever look on Heaven's scenes;
They will find the streets are guarded
By United States Marines.

What kind of hymn is that? Well, here's an explanation:

The U.S. Marine Corps is the United States' military band of brothers dedicated to warfighting. The proud Brotherhood of Marines is guided by principles, values, virtues, love of country, and its Warrior Culture. This brotherhood of American Patriots has no song. Instead, Marine Warriors have a hymn. When The Marines' Hymn is played, United States Marines stand at attention. They silently show their pride in their fellow Marines, their Corps, their Country, their heritage, and their hymn.

The Marines' Hymn is a tribute to Warriors. Marine Warriors stormed fortress Derna, raised the American flag, and gave us "the shores of Tripoli." Marines fought their way into the castle at Chapultepec and gave us the "halls of Montezuma." Marines exist for the purpose of warfighting. Fighting is their role in life. They "fight for right and freedom" and "to keep our honor clean." They fight "in the air, on land, and sea." The Marine Corps is Valhalla for Warriors. U.S. Marines need no song. They have a hymn.

Yes, I know that this was posted before Sunday. Gotta go out of town and won't be posting any more this weekend.