Hearts and minds: New water drilling rig for Horn of Africa and a hospital ship gets ready to go south 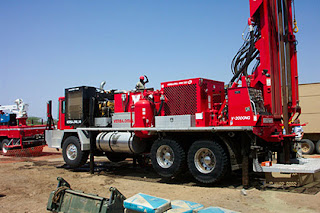 A month or so ago I had a post on the efforts of an Army National Guard Well Drilling Unit at work in the Horn of Africa. Now it appears that NC Guard unit (and follow-on units) have a new tool with which to ply their trade, as set out in New Water Drilling Rig Arrives In Djibouti:

It wasn’t so much of a prayer being answered as it was a positive conclusion as an eagerly awaited and long anticipated new well drilling truck arrived in Djibouti May 1st to be used by the 1132nd Engineer Detachment.

The North Carolina Army unit, working as part of the Combined Joint Task Force Horn of Africa, accepted the rig and performed pre-maintenance checks on actual testing to identify any mechanical problems with the system and prepare the equipment for the difficult conditions it will face in Djibouti.

In the past, well drilling equipment took a long time to set-up and, because of the thick geological structure of the rock formations in Djibouti, the equipment was subjected to heavy maintenance problems. These problems delayed the creation of much needed wells because repair parts had to be ordered from the United States.

The capabilities and composition of the new equipment is very impressive, according to members of the detachment. The new rig travels with two large trucks to support water and filtration during operations; 80,000 pounds of pressure can be exerted, and the drill can reach depths of more than 2,000 feet. It’s capable of using a six or twelve inch roller cone blue steel drill bit that’s designed to drill through the toughest geological formations in Djibouti. The new drilling truck is manufactured by the Laibe Corporation, located in Indianapolis, Ind.
***
Previously, the equipment used by the 1132nd took about a week just for set-up before drilling could begin. The new drilling equipment can be set-up and drilling can commence at a site within one day. To drill one hundred feet with the old drilling rig would take considerable amount of time based on soil composition. With the new drilling rig however, one hundred feet can be drilled within five hours even in the toughest Djiboutian soil, increasing the number of wells that can be drilled at locations throughout Djibouti.

Find a need and drill for it. One way to win hearts and minds of the population with which you are working. 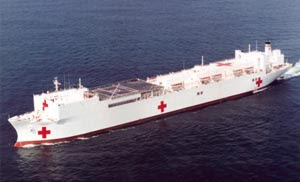 Another indication of a "hearts and minds" campaign involves USNS Comfort as it gets ready to head south for a goodwill tour:

The hospital ship USNS Comfort leaves its Baltimore home today without the usual war or natural disaster on its itinerary, but preparing nonetheless for one of the busiest and most complicated missions of its 20-year service in the U.S. Navy.

Instead of rushing to a crisis, as it did in New Orleans and the Persian Gulf on recent deployments, the ship is beginning a carefully choreographed 120-day tour of Central and South America that will take it to 12 countries with varying medical and humanitarian needs.

First announced by President Bush during a visit to Latin America in March, the mission is as much about diplomacy as medicine and has caused the ship and the Navy to recast the vessel's fundamental function.

Whereas past deployments called for crewing and equipping the Comfort as a floating emergency room for treating war casualties or disaster victims, the ship's commanders have essentially scrapped the old rulebook and outfitted the vessel as a delivery vehicle for routine medical services on land, from vaccinations and eyeglass distribution to dental checkups and minor surgeries.
***
"I think I'm working harder for this deployment than I did when I was operations officer for an aircraft carrier battle group," said U.S. Navy Capt. Robert E. Kapcio, who is leading the ship's deployment. "Really, it's just a huge, huge undertaking."

Kapcio has been designated as the mission's commodore - another new concept, added to give the ship an additional layer of administrative support to deal with all the foreign governments, local humanitarian organizations and volunteers involved. The ship plans to visit each country for about a week, establishing two medical treatment centers at each port.

Planners from the Navy and the State Department have been meeting at each of the host nations to determine where the ship might stop and what services it can offer, sometimes in cooperation with non-government organizations with permanent operations there.