A bitter look at Kosovo 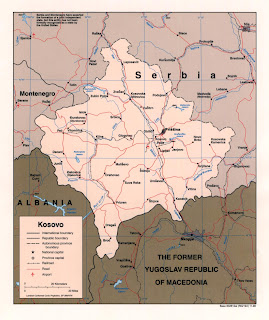 To a large extent, the Kosovo war was a gang warfare. The Serb criminal organization known as Yugoslavia against the Albanian gang known as the KLA. It was a war over turf and lucrative businesses. In what used to be the Third World and moreso in the post-communist countries in transition, criminal activities often accompany "wars of liberation". In Congo, in Sierra Leone, in Chechnyia, in Kashmir - wars are as much about diamonds, oil and opium poppies as about national aspirations. Kosovo is no exception but it was here that the West was duped into intervention. NATO was called upon to arbiter between two crime gangs. There is no end to the mischievous irony of history.

And some odd irony found here:

he day after Ramush Haradinaj resigned as Kosovo's prime minister, Sen. Joseph Biden, the ranking Democrat on the U.S. Senate Foreign Relations Committee, praised him as a patriot and a statesman.

"I want to publicly salute him for his personal courage," said Biden (D-Del.), who described Haradinaj as a young man who looked like he could lift an ox out of a ditch.

The U.S. State Department, French foreign ministry and United Nations also were generous in their praise for the 38-year-old political leader—a nice send-off for a fellow who had just been indicted by the international war crimes tribunal in the abduction, torture and murder of 40 of his countrymen and women.