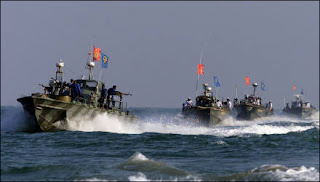 Claims and counterclams as the Tamil Tigers attack from the sea:

Tamil Tiger rebels say they have killed 35 Sri Lankan sailors in a sea attack on a navy base on the Jaffna peninsula in the north of the country.

A rebel spokesman said they overran the base on the island of Delft and the fighting lasted only 20 minutes.

Confirming the attack, a navy spokesman said the rebel claims were exaggerated and fewer than 10 sailors were killed.