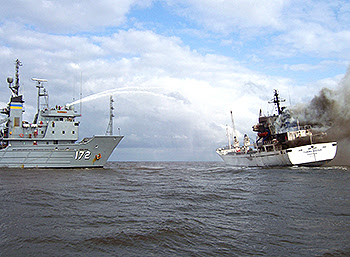 A broken-down cargo ship stolen by machete-wielding pirates off Liberia earlier this month is still missing despite a search involving neighbouring Ivory Coast's navy and a UN helicopter, officials said on Monday.

Attackers armed with cutlasses and sticks boarded the 67-metre MV Tahoma Reefer while it was docked off Monrovia on May 8, beat up the crew then returned to tow the vessel away while they sought medical care on shore.

"Right now the ship is lost," the vessel's captain, Volodymr Shteynberh, told Reuters by phone from Monrovia, criticising a lack of co-ordination between the local authorities and the UN peacekeeping missions in Liberia and Ivory Coast.
***
Security experts are concerned the boat could be used by people traffickers offering Africans illegal passage to Europe or by drug smuggling gangs. West Africa's Atlantic coast is increasingly a transit route to Europe for Colombian cocaine.

Shteynberh, who was on board when the pirates attacked, said their motive was unclear but said the vessel was carrying some 200 tonnes of heavy fuel, worth around $200 000 at local prices.

***
The UN mission in Liberia (UNMIL), helping to restore order after an on-off 1989-2003 civil war, sent a helicopter to look for it as soon as it was reported missing on May 11.

"The vessel was spotted being towed by two smaller boats towards Ivory Coast. UNMIL, which is not equipped with the maritime capability to intercept vessels at sea, immediately alerted the Liberian authorities," it said.

One of the last times we saw MV Tahoma Reefer, a U.S. Military Sealift Command ship was assisting in putting out a fire on her off Liberia (see the photos) back in August 2006 as set out here:

The crew of MSC’s ocean tug USNS Apache rescued eight crewmembers and extinguished a blaze on commercial vessel Tahoma Reefer August 9 after the Estonian freighter was towed about a nautical mile out to sea by the port tug. The fire started while the vessel was in the harbor of the Liberian port city of Monrovia. The fire, which started in the engine room of the 220-foot vessel, quickly engulfed and destroyed the deckhouse.
***
According to Apache’s master, Capt. Charles Rodriguez, his vessel passed close to Tahoma Reefer twice after the fires were out. Both of that break bulk vessel’s holds were full of frozen fish which many of the local residents were “liberating” from the stricken vessel after the fire was put out. Rodriquez said the Tahoma Reefer was quickly surrounded by local fishing boats and native dugouts with occupants celebrating their fine “catch.” 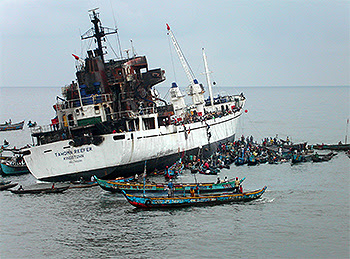 After the fire was extinguished, the ship was quickly surrounded by local fishing boats and native dugouts with occupants eager to remove the shipment of frozen fish that filled both Tahoma Reefer’s holds.

Murdoc has some more pictures of the fire fighting here. Initial report of capture by pirates here. I should note, for the record, that the incident is not one of sea piracy, which requires that the capture of the ship occur on the "high seas." It's more like "Grand Theft Ship."

The following definition of piracy is contained in article 101 of the 1982 United Nations Convention on the Law of the Sea (UNCLOS):

“Piracy consists of any of the following acts:
(a) any illegal acts of violence or detention, or any act of depredation, committed for private ends by the crew or the passengers of a private ship or a private aircraft, and directed:
(i) on the high seas, against another ship or aircraft, or against persons or property on board such ship
or aircraft;
(ii) against a ship, aircraft, persons or property in a place outside the jurisdiction of any State;
(b) any act of voluntary participation in the operation of a ship or of an aircraft with knowledge of facts
making it a pirate ship or aircraft;
(c) any act inciting or of intentionally facilitating an act described in sub-paragraph (a) or (b).”