Problems of the rich 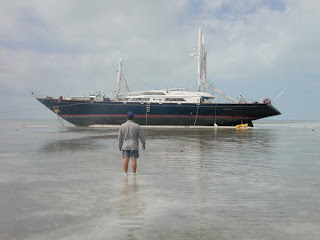 The 158-foot Legacy, once one of the five largest sailing ketches in the world, is mired in sand and mud, in ankle-deep turquoise water 3 miles away from the docks at Mallory Square, exactly where she was thrown by Hurricane Wilma a year and a half ago.

Halmos, 63, and seven crew members nearly lost their lives on Oct. 23, 2005, when Wilma tossed his ship "like a leaf in 25-foot waves" a mile deep into the Great White Heron National Wildlife Refuge, 200,000 acres of some of the most pristine and protected property in the federal government's control.

Since then he has battled pirates, pesky sightseers and bureaucrats while trying to free the $30 million ship.

In February, he finally reached an agreement with the government to begin salvage operations. The plan was to use a new technique: build a 1,000-foot-long, 50-foot-wide canvas wall around the vessel, fill it with water, then float her out. But that effort - which cost $20,000 a day for two months - failed, Halmos says.

"Floating her out was really elegant. There's nothing elegant about dragging her out."

Halmos says he's been reluctant to use traditional salvage methods, which involve large barges and cranes, because that might tear up the fragile ecosystem. His new plan is to spin Legacy so she is facing in the same direction that she entered the preserve, then pull her out.