On Guam, things are getting set for Operation Christmas Drop . Not familiar with this long running "humanitarian airlift?" See here for some background.

The basic idea is to parachute in useful items to remote islands in the Pacific that have no runways:

Operation Christmas Drop is a non-profit organization powered by volunteers from Andersen AFB and the 36th Airlift Squadron from Yokota Air Base, Japan. Every year as part of a training exercise, the two join forces to drop supplies over the Micronesian Islands.

More than 800,000 pounds of humanitarian supplies donated by local businesses, citizens and servicemembers have been dropped throughout the Micronesian Islands.

Some "training missions" are better than others...Well done there, AF! 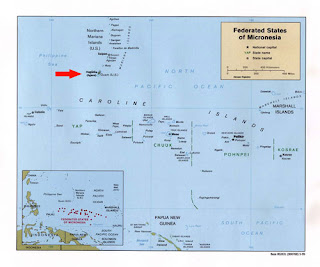 Red arrow points to Guam on map (which should enlarge if you click on it).

I would love someone involved with the operation to send me a map of the route the drop takes.