Sunday Ship History: The Ship that Almost Sank the President 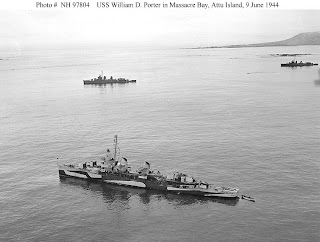 Despite the common sayings that "You make your own luck" or that "“Success always comes when preparation meets opportunity,” many sailors believe that some ships have good luck and some ships have bad luck. Obviously, you'd rather serve on a "good luck" ship than on the other kind. Of course, with the U.S. Navy in wartime, you aren't given much choice.

Willie D was "a 2050-ton Fletcher class destroyer, ... built at Orange, Texas. Commissioned in July 1943, she shook down and conducted routine operations in the Caribbean and western Atlantic until November 1943 .."

Ah, sweet November. Willie D was assigned to a secret mission and then, well, bad luck or poor training and supervision began to meet opportunity. 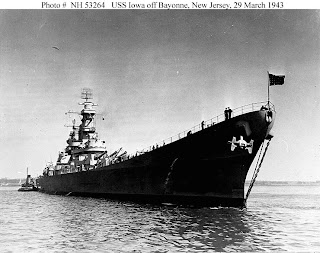 Before we get to that part of the saga, we first begin with the only U.S. Navy ship equipped with a bathtub.

The new battleship USS Iowa (BB-61) had completed one combat sea patrol when she was ordered into a shipyard for some special modifications, including a bathtub. When the work was completed, Iowa traveled up Cheasapeake Bay unit she met up with a yacht traveling down from Washington, DC, carrying a distinguished guest who was transferred to the battleship. President Franklin Roosevelt was going to travel by sea to a

meeting of the Allied heads of state in North Africa. The bathtub was needed because the crippled president couldn't use a shower. After the president was aboard, Iowa headed down to the Atlantic Ocean for the high speed transit.

On her way, the now "Presidential Battleship" picked up some escort destroyers, including the Willie D. Now, as set out here, the Willie D began to earn her reputation as an "unlucky" ship:

The mishaps began in earnest with the mysterious order to escort the pride of the fleet, the big new battleship IOWA to north Africa. The night before it left Norfolk, Virginia, the W.D. Porter successfully demolished a nearby sister ship when she backed down along the other ship's side and, with her anchor, tore down railings, a life raft, the captain's gig and various other formerly valuable pieces of equipment. The Willie Dee suffered merely a slightly scratched anchor, but her career of mayhem and destruction had begun.

The next event occurred just 24 hours later. The four-ship convoy, consisting of the IOWA and her secret passengers, the W.D. porter and two other destroyers, was under strict instruction to maintain complete silence as they were going through U-boat deeding ground where speed and silence were the best defenses. Suddenly, a tremendous explosion rocked the convoy and all of the ships commenced anti-submarine maneuvers. The maneuvers continued until the W.D. Porter sheepishly admitted that one of her depth charges had fallen off the stern and detonated in the rough sea. The safety had not been set as instructed. Captain Walker's fast track career was fast becoming side-tracked.

Shortly thereafter, a freak wave inundated the W.D. Porter, stripping everything what wasn't lashed down and washing a man overboard who was never found. Next, the engine room lost power in one of its boilers. And, during all, the captain had to make reports almost hourly to the IOWA on the Willie Dee's difficulties. At this point, it would have been merciful for the force commander to have detached the hard luck ship and sent her back to Norfolk.

But that didn't happen. The morning of November 14, 1943 dawned with a moderate sea and pleasant weather. The IOWA and her escorts were just east of Bermuda when the President and his guests wanted to see how the big ship could defend herself against air attack, so the IOWA launched a number of weather balloons to use as antiaircraft targets. Seeing more than 100 guns shooting at the balloons was exciting, and the President was duly proud of his Navy. Just as proud was Chief of Naval Operations, Adm. Ernest J. King, large in size and by demeanor a true monarch of the seas. Disagreeing with him meant the end of a Naval Career. Up to this time, no one knew what firing a torpedo at him would mean!

Over on the Willie Dee, Captain Walter watched the fireworks display with admiration and envy. Thinking about career redemption and breaking the hard luck spell, the captain sent his impatient crew to battle stations, and they began to shoot down the balloons that, missed by the IOWA, had drifted into the W.D. Porter's vicinity.

Down on the torpedo mounts, the W.D. Porter's crews watched, waited and prepared to take practice shoots at the big battleship, which, even at 6000 yards seemed to blot out the horizon. Torpedoman Lawton Dawson and Tony Fazio were among those responsible for the torpedoes and for ensuring that the primers (small explosive charges) were installed during actual combat and removed during practice. Dawson, unfortunately, forgot to remove the primer from torpedo tube number three.

Up on the bridge, a new torpedo officer ordered the simulated firing and commanded. "Fire one," "Fire two," and finally, "Fire three." There was no "Fire four." The sequence was interrupted by a whoooooshhh - the unmistakable sound made by a successful armed and launched torpedo.

Lt. H. Seward Lewis, who witnessed the entire event, later described the next few minutes as what hell would look if it ever broke loose. Just after he saw the torpedo hit the water on its way to the IOWA, where some of the most prominent figures in the world history stood, he innocently asked the captain, "Did you give permission to fire a torpedo?"
***
The next five minutes aboard the Willie Dee were pandemonium. Everyone raced around shouting conflicting instructions and attempting to warn the IOWA of imminent danger. First, a flashing light attempted a warning about the torpedo but indicated the wrong direction. Next, the W.D porter signaled that she was going in reverse at full speed.

Despite the strictly enforced radio silence, it was finally decided to notify the IOWA. The radio operator on the destroyer yelled, "Lion (Code word for the IOWA), Lion to come right!" The IOWA operator, more concerned about improper radio procedure, requested that the offending station identify itself first. Finally, the message was received and the IOWA began turning to avoid the speeding torpedo.

Meantime, on the IOWA's bridge, word of the torpedo firing reached President Roosevelt. he only wanted to see the torpedo and asked that his wheelchair be moved to the railing. His loyal Secret Service bodyguard immediately drew his pistol as if to shoot the torpedo!

The IOWA began evasive maneuvers, yet trained all guns on the William D. Porter. There was now some thought that the W.D. Porter was part of an assassination plot. Within moments of the warning, a thunderous explosion occurred behind the IOWA. The torpedo had been detonated by the wash kicked up by the battleship's increased speed. The crisis was over, and so were some careers. Captain Walter's final utterance to the IOWA was in response to a question about the origin of the torpedo. His answer was a weak, "We did it."

From that time forward, the Porter was often greeted with a signal, "Don't shoot! We're Republicans!"

Not surprisingly, the Porter had been banished from the Iowa convoy and sent to Bermuda, where an investigation revealed the torpedo shot was a human error and not an intentional attempt to assassinate President Roosevelt. The ship was sent off the Aleutians where she performed adequately except for an incident during which an allegedly drunken sailor managed to shoot a 5" round at the base commander's quarters (no one was injured except, I suppose, the sailor who did the shooting). 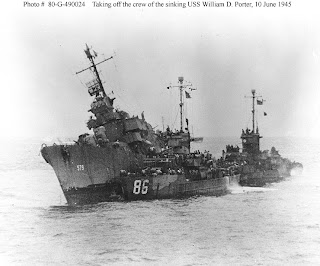 Porter left the Aleutians and participated in a number of battles and escort duties, doing her job well and finally becoming part of the anti-kamikaze screen off Okinawa (see here). It was her luck, bad or otherwise, finally ran out.

Willie D shot down a kamikaze but the aircraft landed close enough to the ship that the suicide plane's bomb, exploding near the destroyer's hull, ultimately sank the Porter despite efforts by various LCSs to assist her (see here). In a rare moment of good luck, the entire Porter crew was saved. As the caption of the nearby photo says:

Sinking after she was near-missed by a "Kamikaze" suicide aircraft off Okinawa, 10 June 1945. USS LCS-86 and another LCS are alongside, taking off her crew.
Though not actually hit by the enemy plane, William D. Porter receiv 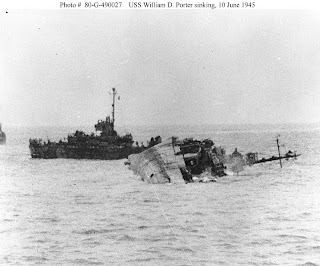 Though she will always be remembered as the ship that almost sank the president, her crew also should be remembered as men to went into harm's way and, except for a few bumps along the way, defended their country. It's time to give them some credit and a salute.
Posted by Mark Tempest at 12/21/2008 01:31:00 PM