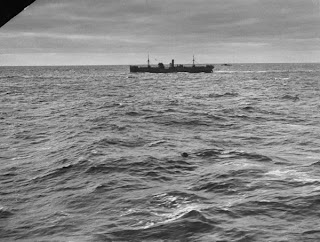 I don't know why David Axe limited his "convoy" reference to World War II, since convoys were a feature of anti-pirate operations going back over 500 years to the earliest days of ships carrying cargo from one point to another , but nonetheless, he writes New Anti-Pirate Tactic: World War II-Style Convoys :

This weekend the first E.U.-escorted convoy will sail from Mombasa, with a French or British frigate providing the heavy firepower. "With escorts, we're getting more food in," Smerdon said. But don't expect the same tactic to work for commercial ships plying the Gulf of Aden. According to Wahutu, most commercial ships sail on strict schedules. "If you have to wait for a convoy to form up, you lose time." And time means money.

So while the world's biggest food campaign piggybacks on World War II-style convoys, for-profit shipping is still going it alone, despite the risks.

Convoys do work, and you can lessen the time of waiting by having enough escorts available. See my earlier post calling for convoys.

Naval convoys have been used for hundreds of years, and examples of merchant ships traveling under naval protection have been traced back to the 12th Century.[1] The use of organised naval convoys dates from when ships began to be separated into specialist classes and national navies were established.[2]

By the French Revolutionary Wars of the late 18th century, effective naval convoy tactics had been developed to ward off pirates and privateers. Some convoy contained several hundred merchant ships. The most enduring system of convoys were the Spanish treasure fleets, that sailed from the 1520s until 1790.

When merchant ships sailed independently, a privateer could cruise a shipping lane and capture ships as they passed. Ships sailing in convoy presented a much smaller target: a convoy was no more likely to be found than a single ship. Even if the privateer found a convoy and the wind was favourable for an attack, it could hope to capture only a handful of ships before the rest managed to escape, and a small escort of warships could easily thwart it. As a result of the convoy system's effectiveness, wartime insurance premiums were consistently lower for ships which sailed in convoys.[2]

NATO has an organization of personnel trained in setting up convoy operation under the name of Naval Coordination and Guidance to Shipping (NCAGS)(see here for some background and here).

The U.S. has several reserve units devoted to worrying about such matters (and in which I toiled for many years), folded into the U.S. Fleet Forces Command (pdf). More on the U.S. NCAGS program here (pdf):

Naval Cooperation and Guidance for Shipping (NCAGS) defined
• NCAGS is a program that bridges the gap between operational forces and merchant shipping by providing a framework for communicating directions, advisories, concerns and information within a maritime region.
• The mission is to assist operational commanders in managing risk by providing situational awareness and near real-time information on the commercial shipping picture to help ensure the safe passage of merchant shipping and the safety of naval vessels. This is accomplished through the use of technology and cooperation between partner nations and commercial industry.
NCAGS is a component of the Maritime Strategy and helps build Maritime Domain Awareness
• NCAGS is an important part of the Maritime Strategy and provides a framework toward building Maritime Domain Awareness (MDA), an effective understanding of anything associated with the maritime domain that could impact the security, safety, economy or environment of the United States.
NCAGS Capabilities – Global Force Provider
• Organized under USFF, NCAGS units in the United States are located in Bronx, N.Y., Chicago, IL; Tacoma, Wash.; and Miami, Fla. Each unit is led by a Navy captain and includes 48 personnel from the Navy Reserve force. Many assigned personnel have extensive shipping industry experience or merchant marine qualifications.
• Liaison Officers (LNOs) -- Provide advice on NCAGS measures; senior liaison with civil maritime industry and fleet commanders.
• Shipping Coordination Team (SCT) -- Provides capability for a 24-hour watch at sea or ashore; flexible configuration adjusting to Combatant Commander needs.
• Shipping Coordination Center (SCC) -- Provides analysis capability supporting forward deployed LNOs and SCTs. SCCs are located in Dam Neck, Va., Key West, Fla., and Alameda, Calif., increasing MDA and facilitating the movement of goods and people into U.S. ports.

The NATO Shipping Centre is largely an NCAGS operation.

UPDATE2: Speaking of earlier pirate wars, how about Pompey vs. The Pirates circa 67 BC?

The pirates were at this time masters of the Mediterranean, and had not only plundered many cities on the coasts of Greece and Asia, but had even made descents upon Italy itself. As soon as Pompey received the command, he began to make his preparations for the war, and completed them by the end of the winter. His plans were crowned with complete success. Pompey divided the Mediterranean into thirteen separate areas, each under the command of one of his legates. In forty days he cleared the Western Sea of pirates, and restored communication between Hispania, Africa, and Italy. He then followed the main body of the pirates to their strongholds on the coast of Cilicia; after defeating their fleet, he induced a great part of them, by promises of pardon, to surrender to him.

Cilicia is an old name for the Mediterranean coast of Turkey.

. . . The grain did nobody in Athens any good until it arrived . . . and there were unscrupulous competitors. . .and pirates loose all over the seas. One of the reasons Piraeus was so important a center for the grain trade was that Athens had a navy large enough to supply escorts to convoy fleets of freighters . . .

UPDATE: Technically, unless the merchant ships are placed under military control, the proper word is not "convoy" but "accompaniment." See ATP2(B):

(4) Convoy. NCAGS can recommend and facilitate convoy operations for merchant shipping. The purpose of convoy operations is to escort and to protect merchant ships by means of military assets through a specific area with higher risk due to unlawful interference. The safe passage of a convoy depends on the organisation before sailing, the management and control at sea and the skilful handling of each ship while in convoy. Ships in convoy sail under military command. Merchant ships under naval supervision have to follow the orders of the Convoy Commodore, other merchant ships cannot be forced to take part in a convoy organisation, but they can be integrated on a voluntary basis. Masters are at all times responsible for the crew, safe navigation and handling of their ship. Details will be promulgated via NAVWARN.