Piracy continues to move down the east African coast 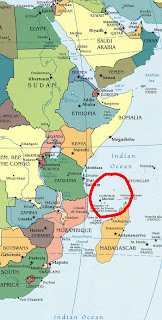 A Dutch container ship outruns some would be pirates off the coast of Tanzania (that's the country below Kenya on the African east coast), as reported here:

A high seas chase in which a container ship outran pirates shows the hijackers are extending their reach further out from Somalia, mariners say.
***
"Earlier attacks were on ships off the coast of Somalia, then off the coast of Kenya and now this was 450 nautical miles off Dar es Salaam," Noel Choong of the International Maritime Bureau told [CNN]...

You know, there's lot of money in this and it is easy to imagine some additional pirate "safe havens" being established away from Somalia proper...

But the pirates have already moved the goalposts in the game of high-seas tag with warships deployed to protect shipping, and have gradually turned their gunsights on targets outside Somalia's waters.

"The problem is that the pirates are no longer just attacking ships off the Somalian coast but are going further east and south where there is no naval protection," Noel Choong, head of the International Maritime Bureau piracy reporting centre in Kuala Lumpur told AFP.

"Previously the pirates were attacking off southern Somalia but now you are seeing attacks 400 to 500 miles from the Kenyan coast, where they are targeting ships, and they are going even as far off to Tanzania, which is further south."
***
The IMB said the ship's captain noticed a white-hulled fishing boat believed to be the pirates' mother ship near the scene of the attack.

"We find it very disturbing that they are going so far out of their operational area, encroaching in waters at least two countries away."

"The fact that they can attack 450 nautical miles east of Dar Es Salaam is very worrying."