A spate of articles on the pirates of Somalia offered up over the weekend including a summary piece titled Pirates of Aden:

This year, Somalian pirates hogged the news with their derring-do in the Gulf of Aden but shipowners were not amused as they reportedly had to pay millions to secure the release of their vessels and crew.

The Gulf of Aden, located between Somalia and Yemen, was the focal point of pirate activities.

Taking advantage of a country without a stable government, the pirates attacked more than 90 vessels this year, seizing almost 40, and raked in some US$30mil (RM95mil) in ransom.

One titled "The year Somali pirates challenged the world:

Over the past year, Somali pirates have hijacked everything from luxury yachts to oil tankers, defying foreign navies and holding the world to ransom over one of the planet's busiest trade routes.

What was once a group of disgruntled fishermen has turned into a fearsome organisation which has attacked more than 100 ships this year alone and raked in an estimated 120 million dollars in ransom money. 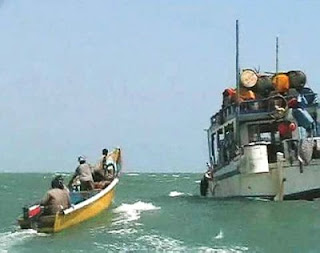 Armed with rifles, grenade-launchers and grapnel hooks, the pirates have wreaked havoc in the Gulf of Aden, where thousands of merchant vessels bottle-neck into the Red Sea each year.

The cost of ransoms, delays and insurance premiums has hit the shipping industry hard, prompting some companies to opt for the longer but safer route around the Cape of Good Hope.

"This unprecedented rise in piracy is threatening the very freedom and safety of maritime trade routes, affecting not only Somalia and the region, but also a large percentage of world trade," the top UN envoy to Somalia, Ahmedou Ould Abdallah, said recently.

One noting the benefits to the local Somali economy by the influx of pirate money:

And in an impoverished country where every public institution has crumbled, they have become heroes in the steamy coastal dens they operate from because they are the only real business in town.

"The pirates depend on us, and we benefit from them," said Sahra Sheik Dahir, a shop owner in Haradhere, the nearest village to where a hijacked Saudi supertanker carrying two million barrels of crude was anchored last week.

These boomtowns are all the more shocking in light of Somalia's violence and poverty: Radical groups control most of the country's south, meting out lashings and stonings for accused criminals. There has been no effective central government in nearly 20 years, plunging this arid African country into chaos.

But in northern coastal towns like Haradhere, Eyl and Bossaso, the pirate economy is thriving thanks to the money pouring in from pirate ransoms that have reached C$37 million this year alone.

See also "A pirate’s life is flashy in Somalia."

Articles noting the departure of a Chinese force naval force for the Somalia ares like this one:

A Chinese naval fleet - armed with special forces, guided missiles and helicopters - set sail on Friday for anti-piracy duty off Somalia, the first time the country has sent ships on a mission that could involve fighting beyond its territorial waters.

Decorated with colored ribbons and flowers, the three warships - two destroyers and a supply vessel from the People's Liberation Army Navy - were unmoored at the military port by crew members in white naval uniforms.

The fleet will carry about 800 crew members, including 70 soldiers from the navy's special force.

The current expedition aims to guard civilian ships from attacks by Somali pirates.

Articles noting the limits imposed on civilized countries by law, such as this one:

On December 25th, a German frigate off the coast of Somalia, sent its helicopter to interrupt a pirate attack on an Egyptian merchant ship. One member of the Egyptian crew had already been wounded by gunfire, but the German helicopter stopped the attack. German sailors then captured and disarmed six of the pirates. The pirates were then set free. This is because German law only allows the prosecution of pirates who are attacking Germans (or German property.) The Egyptian ship was carrying a cargo of wheat from Ukraine to South Korea.