A CHINESE navy squadron of two destroyers and a supply ship will leave a naval base in southern China on December 26 on the country’s first major overseas combat deployment and will join coalition forces on anti-piracy patrols off Somalia.

The long-anticipated move was confirmed by defence ministry spokesman Hu Changming, who said the People’s Liberation Army Navy would deploy destroyers, 169 Wuhan and 171 Haikou, and the supply ship 87 Weisanhu, for three months.

One of the PLAN destroyers, 171, is Aegis-like, see here. 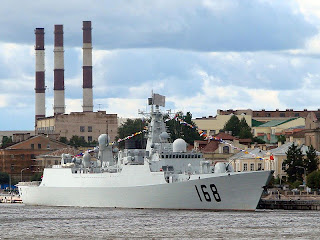 The other destroyer 169 is PLAN 052B type, more conventional but with stealth characteristics. It is the sister ship to the one pictured nearby #168. 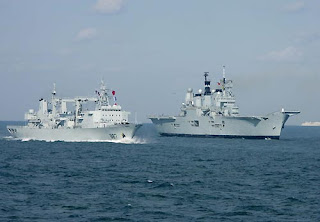 PLAN supply ship 87 Weisanhu is pictured nearby and provides fuel and other sustainment provisions for the destroyers. In the photo she is shown during operations with the British navy from a couple of years ago.

China's motivation is not surprising, if the following is accurate:

Somali pirates have attacked more than 300 vessels in some of the world's most critical shipping lanes, capturing 40 of them and collecting $40 million in ransom. They are still holding 14, including a supertanker and a ship loaded with weapons, and more than 25 crew members.

The Chinese government said 1,265 of its ships traversed those shipping lanes last year and that 20 percent of them were attacked.