ment adviser points out that the world-wide shipping industry is taking an economic pounding here:

If the end of 2008 is a predictor of business in 2009, the shipping industry is in for one heck of a nightmare. On June 5, 2008, it cost $233,988 per day to charter a Capsize tanker, the largest ocean-going cargo vessel available for shipping dry bulk commodities. Six months later that same tanker charters for $2,773 per day, down 98.8% in less than half-a-year. To put that in perspective, imagine paying $15.00 for a cab ride home and six months later the same cab driver charges you $0.18. This is a problem shipping companies will continue to face in the coming months as demand for these tankers has fallen off a cliff.

The effect of lower shipping costs has been dramatic, as set out here:

Ocean shipping costs have plunged to 22-year lows, skewing global grain-trading patterns to the point where hog farmers in the United States are importing wheat from Britain and Japan has shunned American corn in favor of supplies from Ukraine.

In some countries, it is now less costly to ship grain thousands of kilometers across the ocean rather than move supplies hundreds of kilometers by barge or railroad cars. But the phenomenon should be short-lived and the United States should remain the world's top exporter of corn, wheat and soybeans, according to specialists in the sector.

"It has opened up opportunities that perhaps wouldn't have been conceivable before and one-off trades may well happen, but it is not really changing the grain flows," said David Doyle, head of wheat at Openfield, a farmers' cooperative in England. 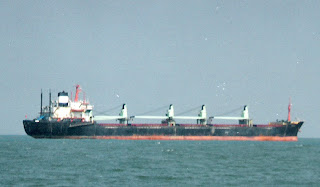 ght rates reached a record high in May and have since fallen more than 90 percent in a few months to as little as $10 a ton to most destinations.

"Ocean shipping costs are so low that it would be cheaper for south Indian buyers to import Russian wheat than move wheat from north India by train," said one European trader who was not authorized to speak to the news media.
***
"Ship owners are giving away bulk carriers at operating costs just to generate cash flow and to pay crews' wages," said another European trader who was also not authorized to speak to the news media. "This will expand the selling range of U.S., Argentine and Australian wheat in the Middle East market if they can compete against the Russians on prices."

The shipping container business is also way down, as reported here:

According to the Transpacific Stabilization Agreement, which represents 15 ocean carriers in the Pacific, Asia to U.S. container cargos dropped 6.9% in the first half of 2008 and could end the year down as much as 8% from last year.

And officials from TSA are not predicting a rebound in cargo demand until the second half of 2009. "Clearly we're in a slowdown right now, but just as clearly, the current freezing up of the global credit system is unsustainable," said TSA chairman Ronald Widdows in a statement. "We expect to see an orderly de-leveraging of the financial markets over the next year that will begin to restore confidence with year-on-year cargo demand growth resuming in late 2009."
*** 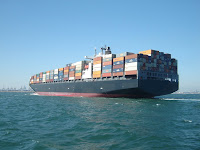 And with demand down, ocean container shipping rates have so dramatically in the past quarter, some shipping lines are reportedly refusing what cargo there is because the going rates are below operating costs—meaning the carrier would lose money by taking the business in certain lanes. Reuters reports that A.P. Moller-Maersk's Maersk Line is removing 7,600 twenty-foot equivalent units (TEU) per week from its Asia-North Europe lanes because, "The current Asia-Europe market is characterized by unsustainable rate levels," according to Maersk officials.

UPDATE: JOC reports up to 200 container ships could be laid up here:

Over 200 container ships likely will be laid up in the New Year as charter ship owners and ocean carriers adjust to weakening cargo demand, plunging freight and vessel hire rates, and an influx of new ships onto key liner trade routes.

Some 165 container vessels totalling 430,000 TEUs capacity were idle just before Dec. 25, up from 300,000 TEUs two weeks earlier, according to the latest estimates from AXS Alphaliner, the Paris-based consultant.

This represents 3.5 percent of the world fleet in TEUs, equivalent in relative terms, to the laid-up figure during the lowest point of the 2002 slump, AXS says. The list of unemployed tonnage includes six ships of between 7,500 and 10,000 TEUs, and 19 between 5,000 and 7,500 TEUs.
***
Charter ship owners have taken the biggest hit from the market slump accounting for 105 of the 165 idled vessels, a figure that’s set to rise sharply in the coming weeks as scores of vessels are due to come off hire with little prospect of re-employment.