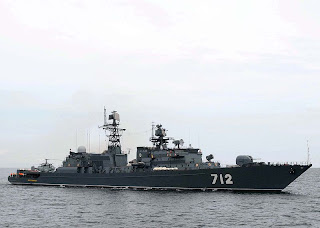 Reported as Russian frigate escorted over 50 ships on anti-piracy mission:

"During its mission in the Gulf of Aden, the Russian combat vessel escorted 13 convoys, totaling 51 ships, through the dangerous waters [off the Somali coast]," Capt. 1st Rank Igor Dygalo said.

Dygalo said the frigate would continue its mission until mid-January and would be replaced by another Russian combat ship.

Good. This is a way to contain the Somali pirates.

UPDATE: In a semi-related story, the negotiation process over the captured Ukrainian ship carrying tanks and other weapons is nearing its 100th day as reported here.
Posted by Mark Tempest at 12/30/2008 08:30:00 AM