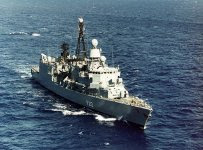 A German naval vessel intervened in an attempted Somali ship capture and chased the pirates off, as reported here:

A German military helicopter chased away pirates on Thursday (25 Dec) who were trying to board an Egyptian ship off the coast of Somalia. One of the ship's crew was shot in the attack.

The bulk carrier with 31 crew was passing through the Gulf of Aden on its way to Asia when gun-toting pirates in a speedboat began pursuing it, said Noel Choong of the International Maritime Bureau's piracy reporting center.

A passing ship alerted the Kuala Lumpur-based bureau, which asked a multinational naval coalition force in the area to help, said Choong.

In response, the German navy frigate Karlsruhe dispatched a helicopter, a military spokesman said on condition of anonymity, citing policy.

The pirates fled as the chopper reached the vessel, according to a statement from the German military, but not before shooting and injuring one the ship's crew.

A second helicopter, carrying a medical team, retrieved the injured crew, who is now receiving treatment on the Karlsruhe, the statement said.