Somewhere in the miles between Tacoma and Hawaii, a steam ship plods through the ocean. Thirty-five souls are aboard in transit between one place and another. The ship's superstructure is white, her hull dark. She carries the name SS Cynthia Olson. Built in 1918, once named Coquina. She's now part of the Olson Shipping line out of San Francisco. A "steam schooner" they call her - all 250 feet of her. She's got a load of Army supplies and a thousand miles to to go to reach Diamond Head.

Two of the men aboard are in the Army, the rest are merchant sailors, some are veterans of a hundred sea trips, others newer to world of big oceans and little ships. Men on watch, men eating, men sleeping or reading or dreaming. A sailor smokes a cigarette. Another ties his boots. Casual chatter among the bridge watch and the engineers down below watch gauges and spin valves, adding or releasing steam, oil, water.

Out there at sea the ship is not alone. Unknown to the Captain or the crew, they have an unexpected companion. Suddenly a shadow rises from the depths and begins to attack them using a deck gun. The ship's crew radios for help, describing the gunfire from the submarine that suddenly appeared beside them at sea. The radio signal is weak and then gone - the message it carried is shocking - an unprovoked submarine attack on a merchant ship at sea.

But that shocking message is soon lost in the greater news of a much larger surprise attack. After all, what is an attack on a small merchant ship compared to the attack on the great naval fleet lying smashed at a Navy base that everyone now knows the name of - Pearl Harbor.

SS Cynthia Olson is sunk at sea with all hands and two passengers. Her master, Berthel Carlsen, goes down with the ship. As battleships lie broken and burning, SS Cynthia Olson is a very brief footnote in history except to the families and friends of her crew. She's the first U.S. merchant ship sunk by the Japanese in World War II. Sunk because she stumbled into the path of a Japanese submarine on December 7, 1941. 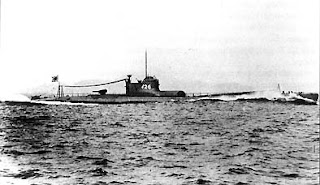 So, when you pause to remember the Pearl Harbor attack on this day, its 67th anniversary, add to your thoughts and prayers the 35 men killed at sea on a merchant ship, carrying goods from Tacoma to Hawaii, that met the Japanese submarine I-26 1000 miles northeast of Diamond Head on Pearl Harbor Day.