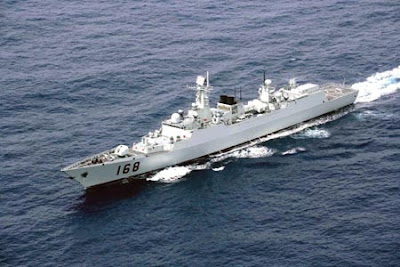 Last Friday, two destroyers and a supply vessel departed on China's first long-range naval expedition since 1433. The decision to join the global armada in the pirate-plagued waters off Somalia is a momentous step in China's rise as a world power.
***
China has long been a free rider on the ocean highways. It has enjoyed the benefits of maritime trade and energy routes, so vital to its economic boom, while other countries' navies have kept them open.

Yet with growing wealth, pride and ambition come expectations that Beijing will contribute to the safety of an interdependent world. It was only a matter of time before China, along with the other awakening giant India, joined the club of maritime security providers, using their fleets simultaneously for self-interest and the common good, whether fighting piracy, interdicting smuggling or delivering disaster relief.
***
The Somali piracy crisis makes the ideal platform for China's debut on the high seas. It gives Beijing every justification for easing its doctrine of non- intervention: Chinese lives and interests are in danger, the United Nations has blessed action in Somali waters, almost everyone else is in the game, and what passes for the Somali government has invited China in. And in times of economic pain, a show of military strength can be a politically smart distraction.

There is also a deeper logic to China's experiment in gunboat diplomacy. China's strategists worry at the vulnerability of their economy to maritime corridors, such as the Strait of Malacca, which they think America's superior navy could choke at will.

The primary mission of the People's Liberation Army Navy remains stopping Taiwan from declaring independence, as well as keeping US forces at bay in any ensuing war. But some new or projected capabilities are meant to give Beijing wider options, whether thwarting energy blockades, deterring other powers, or protecting Chinese nationals and interests far away.
***
China has as much right as any trading nation to guard itself in the lawless waters off the Horn of Africa. Warships from European Union nations, the US, India, Russia and even Malaysia are already on patrol; there is talk of South Korea and Japan joining in.

It was inconceivable that China would forever outsource its maritime security to the United States or India.

The challenge now is to forge operational cohesion in a motley multinational flotilla. The Chinese presence is a critical opportunity for China, the US, India and others to shape the rules and habits of cooperation and communication at sea that could be crucial to future peace. As things stand, these navies lack even a basic agreement to stop accidental clashes, like the treaty that helped keep the Cold War cold.

Lot of ocean out there, but lots of chokepoints for China to worry over. Cooperation makes it easier to avoid misunderstandings and the consequences that can follow. Nice to have the Chinese moving up to the grownup table of sea lane protection.
Posted by Mark Tempest at 12/30/2008 11:45:00 AM