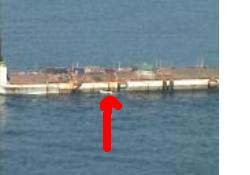 The ICC International Maritime Bureau’s Piracy Reporting Centre (PRC) received the distress call from the Chinese heavy lift vessel, Zhen Hua 4, which was broadcast immediately to all the naval commands in the area. The Zhen Hua 4 had been boarded by pirates who had not been able to enter the accommodation block. The crew of the vessel had locked themselves in having attempted to thwart the boarders through evasive manouvres and the use of water cannons.

The Combined Task Force requested a Malaysian Naval vessel, which was closest to the distress position to respond. The Malaysian warship scrambled a helicopter to the scene of the attack closely followed by the warship. When the Malaysian helicopter arrived there were six pirates on board the hijacked vessel and three on board a nearby skiff. Warning shots were fired at the skiff causing the pirates to panic and capsizing the skiff as a result . The attackers withdrew and fled on board another skiff that was alongside the Zhen Hua 4. The Malaysian Navy reported seeing a suspected pirate ‘mother ship’ near the vessel. Another Combined Task Force vessel supported the actions taken by the Malaysian Naval vessel.