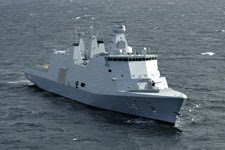 Seven lucky pirates were rescued by a Danish warship after the pirates spent several days adrift in the Gulf of Aden because the Danes complied with international law. As reported here:

“Under international law, ships are obligated to help people who are distressed at sea,” the navy said. “Because the people on board couldn’t be directly connected with a criminal act, they were treated only as distressed.”
***
“Because of the weather in the area, it wasn’t possible to tow the distressed vessel,” the navy said. “For the safety of sea transport in the area, the vessel was therefore destroyed.”

The alleged pirate vessel had been adrift in Yemen waters, and the crew has now been turned over to Yemeni authorities, the navy said. The Absalon’s crew confiscated the weapons found on board.

The weapons included anti-tank rockets and machine guns, according to broadcaster TV2. The pirates had been adrift at sea for seven days, the last three days without food or water, TV2 said.