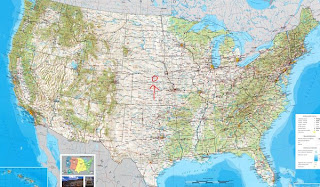 Forty years ago, driving across the relative flat lands in the center of Nebraska, it might have struck some drivers as odd to run across a large Navy facility near Hastings - the Naval 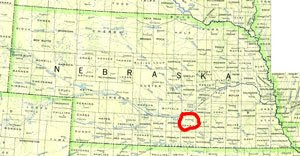 Ammunition Depot (NAD), Hastings. In fact out in the midlands the Navy built its largest ammunition depot, where ammunition for Navy ships was both manufactured and stored while awaiting shipment to either coast.

Before World War II, the U.S. Navy had an uncomplicated ammunition storage system, as set out here:

Under the Navy's peacetime practice, each combat unit of the fleet was provided at the time of its commissioning with enough ammunition to fill its magazines, and,in addition, a reserve supply was stored ashore. Periodically, much of this ammunition had to be overhauled, an operation involving the removal of all explosive material and the refilling with new, and the checking of all mechanical parts. The nature of the overhaul operation was such that it was feasible of accomplishment only at a well-equipped shore station. As safety considerations demanded that a combat ship have its magazines emptied before coming into a navy yard, convenience suggested that the ammunition depots, equipped to store the reserve supply and the magazine ammunition and to conduct the overhaul operations, be located in close proximity to the yards.

On the East Coast, the naval ammunition depot at , , was only 12 miles away from the Boston Navy Yard, across . The area had two depots, one at , , 45 miles up the Hudson River,devoted primarily to industrial activities, and one at , N.J., 50 miles northwest of the yard by rail, serving principally as a storage depot. For , there was the depot, across the from the navy Yard The St. Juliens Creek depot, 3 miles up the from the Norfolk Navy Yard, was part of the important Hampton Roads operating area. In addition,at , there was a large mine depot, which will be discussed in this chapter as roughly equivalent to an ammunition depot.

East of the Sierra Nevada, 375 miles by rail from the area, was the newest ammunition depot, at , , well located to support the depots at and . It was the only depot within the that was up to date in design, for its very existence could be attributed to a disastrous explosion at one of the older depots which had brought in its train a revolutionary change in ammunition stowage practices.

That the handling of explosives was dangerous should not be a surprise. The explosion referred to above involved the Lake Denmark site destroyed virtually the entire Naval Depot and also did a great deal of damage to an adjacent Army ammunition facility. A fuller description of incident is set out here. An interesting presentation on current issues resulting from the blast can be viewed here.

As noted, the main lesson learned from the event was that ammunition bunkers needed to be spread further apart to avoid the sort of chain reaction that destroyed the facility. It also looks like it dawned on the engineering command that it might be a good idea to place future depots in less densely populated than or - thus, and were logical choices.

In the days that immediately preceded the entry int WWII the Navy began to make improvements to its existing facilities and development of additional magazines in , and . Further, a large facility was established in southwestern as Crane Naval Ammunition Depot. Shortly after Pearl Harbor, an ammunition shipping facility was authorized for the area, in the (actually off the at Port Chicago. Some of you will recall the later Port Chicago explosion and mutiny. See also here.

Despite these steps and many others, it became apparent that even more was needed:

Even while the depots at Hawthorne and Crane were being expanded so prodigiously in the early summer of 1942, it became apparent that the need for inland production and storage of naval ammunition would still not be met. Enlargements under way would,when completed, tax the capacities of their rail connections, however, and further expansion, it was decided, would have to take place at new points.Plans were laid, therefore, for the building of two additional inland depots, on transcontinental railroads, and the choice of location fell on Hastings, Nebr., and McAlester, Okla. On the first of July, letters of intent were forwarded to contracting firms authorizing them to begin construction.

Operation of an ammunition depot requires a large organization. Until the summer of 1942, all depot labor had been civilian,but,under the circumstances that had come about, it became impossible to maintain operations on that basis. The new depots had been deliberately located in thinly populated areas, areas incapable of supplying the wartime labor force for the huge operations necessary. To relive the condition of inadequate forces, civilian housing projects had been developed near several of the depots, but it was finally decided that civilian labor would have to be supplemented by enlisted personnel, a decision resulting in the formation of Ordnance Battalions.

The Nebraska and Oklahoma facilities each were over 70 square miles in size. Storage bunker design was practical:

High explosive magazines for bulk explosives and high-explosive loaded in thin containers, fuses and detonators, were reinforced-concrete earth-covered arch structures, 256 feet wide and 20,50, or 80 feet long. For less hazardous but still highly inflammable materials, like smokeless powder, fixed and semi-fixed ammunition, small arms ammunition and loaded projectiles, magazines were of two general types: above-ground and earth-covered. Magazines of the above-ground type, illustrating earlier practice, were built with masonry walls, either of reinforced concrete or brick, with light steel roof trusses supporting a pitched roof of corrugated cement-asbestos. The light roofs were designed to be blown off in the event of an explosion. The earth-covered magazines were built either as three-span multiple arches or as vertical-walled, flat-roofed, reinforced-concrete structures. 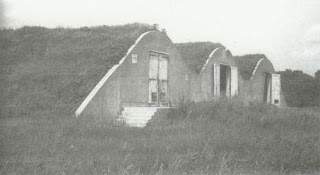 A large number of experimental triple-beehive magazines was built at McAlester, but not repeated elsewhere. Irrespective of structural type, these magazines provided about 5,000 square feet of useful storage space.

Storehouses for inert materials and buildings to house industrial operations were of masonry when permanent construction was called for; otherwise, of timber frame and composition-board siding. All building design was dictated by the function to be served.

Based on the disaster at Lake Denmark, great care was taken to provide protection against lightning:

Lighting protection was an important feature of construction at all stations. All metal, including concrete reinforcing, had to be thoroughly grounded in buildings were explosive or inflammable materials were to be stored or handled. Buildings not earth-covered were provided with a primary lightning protection system composed of a number of grounded steel masts interconnected under ground by a heavy wire girdle. The line of masts, typically surrounded the structure to be protected, a few feet outside the building lines, providing an "umbrella of protection."

The effect of the building of a large ammunition depot on the town of Hastings, Nebraska, is well set out here (good short video here):

The construction of a $45 million ammunition depot (the largest in the nation) brought both growth and stress to Hastings Nebraska. The development helped the Hastings community emerge from the Depression, but it also brought a great influx of immigrants and created new social pressures. At its peak, the depot employed approximately 2,000 military personnel and 6,692 civilian production workers. There were also 2,000 civilians still involved in construction of the plant. All together, over 10,000 workers.

In addition to the regular problems of rapid growth, there was a substantial issue with racial prejudice - both during the construction as many construction workers were Native Americans and with about 20% of the plant workers, who were black Americans:

Racial prejudice became even more apparent when the Navy announced that black sailors and civilians would serve at the Hastings ammunition depot. Immediately there was concern among the white residents about where the newcomers would be housed.
***
The federal government also provided housing for black civilian workers in the Spencer Park addition located in southeastern Hastings. When Spencer Park was completed in 1944, black families lived in 260 buildings in the southeastern section farthest away from Hastings. The Hastings community had limited experience with race relations, but it now had segregated housing. Not surprising, the segregated Navy provided segregated on-base housing as well.
*** 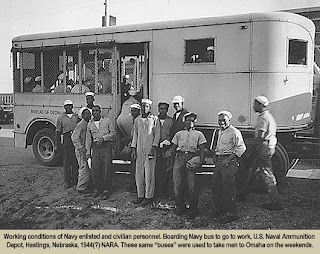 There was a need for recreation as well as housing, and once again, the solution was a separate facility. There wasn't much for African Americans to do in Hastings when they weren't working. Every Friday afternoon Hastings NAD officials provided "cattle trucks" with benches on the sides, to transport black workers to Omaha where there was a sizable African-American community. In essence, blacks were forced to travel for hours in converted cattle trucks in search of entertainment because the white community of Hastings assumed separate facilities for African-Americans was a necessity.

Eventually, with the aid of a federal grant, Hastings opened a separate USO club for black servicemen at 624 West First Street. Regularly scheduled activities and dances were held.

The work being performed was dangerous:

At least four major explosions occurred, killing 21 people. The first accident left a crater 550 feet long, 220 feet wide, and 50 feet deep. The blast caved in the roof on the Harvard, Nebraska, High School, 15 miles away. The blast was felt as far away as Omaha, almost 150 miles away.

In addition to the black workers and sailors, many of the plant workers were women: 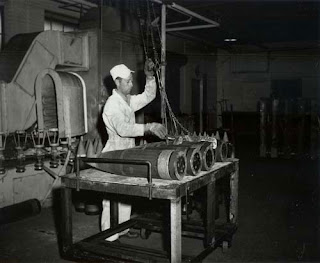 How much economic opportunity?Almost three times what they could earn in town as clerks:

The pay for civilian workers was 74 cents per hour and the workweek was 60 hours - about $45 per week.

The facility operated 24 hours a day during WWII and operated under reduced staff afterward, with a slight increase during the Korean War. It was closed in 1966 and various acreage has been converted to other uses.

So, if you happen to be driving through Hastings on U.S. Highway 6, off to one side you will see the remnants of the Hastings NAD.

Give it a little salute as you drive by, to honor the men and women who served there country and the Navy there during a time of war.

Many of the photographs are from the Adams County, Nebraska Historical Society website.
Posted by Mark Tempest at 12/14/2008 06:42:00 PM