Bwahaha! Not so much surprise - U.S. ships bombs

A speculative article first reported in The Herald of Scotland here and picked up by the Times of India here, on Hot Air here and on forums at both the Democratic Underground here and the Free Republic here and in roughly a gazillion other places, all of which seem, once again to see this putative shipment to Diego Garcia as a sign Iran or somebody is soon to be targeted...


“They are gearing up totally for the destruction of Iran,” said Dan Plesch, director of the Centre for International Studies and Diplomacy at the University of London, co-author of a recent study on US preparations for an attack on Iran. “US bombers are ready today to destroy 10,000 targets in Iran in a few hours,” he added.

In the past these 1000 lb and 2000 lb bombs have been used for such nefarious purposes as . . . target practice. Here is a caption for the photos above:

In fact, if you click on the following photo, you might see a bomb headed for the dirt (inside the red circle): 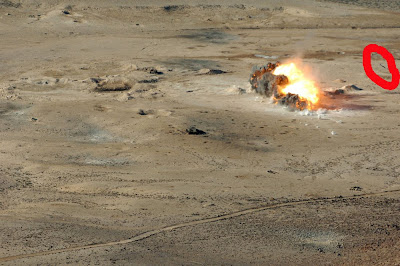 Now, think about this - those bombs being dropped by the Red Rippers had to get to Djibouti somehow. Maybe by shipping them? So why are there now so much fun and excitement about another shipment of bombs?

Next we''l learn that jet fuel is shipped to Diego Garcia for .... fueling jets.

And food is shipped for feeding .... troops.

Is there no end to this madness? Bwahaha!

Email ThisBlogThis!Share to TwitterShare to FacebookShare to Pinterest
Labels: Conspiracy theories, Not So Much Humor