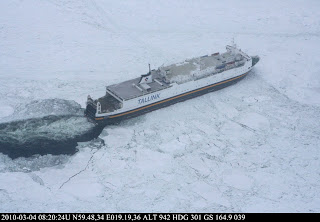 At lunchtime today (Thursday 4 Mar 10) the ferry Birger Jarl was trapped in the ice, 0.3 nautical miles or about 550 meters from Tjarven. The vessel then drifted southward with the ice nearer Tjarven and ground around it.

Shortly after, also ferry Sea Wind was trapped in the ice, but no danger to the ship was not. Sea Wind is still in the area.

Coast guard aviation has this afternoon flown over the area with the two ferries. The evacuation of Birger Jarl, which was prepared by the MRCC was not needed to be implemented. Birger Jarl assisted now by the icebreaker Vidar Viking and towed into safer waters from the fairway to Stockholm.

During the late afternoon also ship Viking Rosella stuck in the ice in the same area. 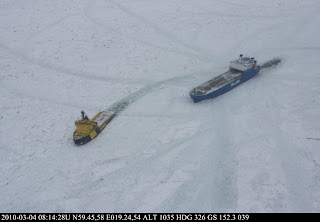 The six ferries Via Mare, Sea Wind, Amorella, Isabella, Finnfellow and Regal Star has been stuck in ice off Kapellskar and runs against the basic fields Tjarven.

The ferries are assisted by tugs / icebreakers Tor Viking and Vidar Viking to get away from the ice and assistance toward safer waters. MRCC has launched a search and rescue, but an evacuation of the vessels are not current at the moment.

Coastguard vessel KBV 010 is heading for the area.

Four ferries carrying about 1,000 passengers have been freed from heavy ice off the coast of Sweden and were back in port Friday, said the Maritime Search and Rescue Center.

Arctic winds hampered icebreakers' efforts to free the ferries and at least 30 other ships from the icy grip of the Baltic Sea on Thursday, according to Birger Knutsson, a spokesman for the maritime center, in Gothenburg, Sweden.

The area with the worst ice was bounded by mainland Sweden, the Stockholm archipelago and the Finnish island of Aland, according to the Swedish Maritime Administration. 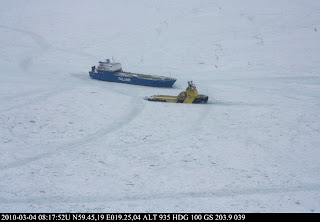 "It has been a lot colder than normal in the southern parts of the Baltic Sea. But in the north, all is normal, with normal levels of ice," said Tommy Gardebring with the maritime group.

"However, in the worst-affected areas, the icebreakers that normally operate haven't been able to cope with the ice.