New land tactics being employed by Somali pirates may be a cause for concern, a UN spokesman told the BBC.

Peter Smerdon said three trucks and their drivers were being held in the pirate town of Eyl after delivering food aid last week in central Somalia.

He said they were hijacked on Thursday when traveling without an escort in the first incident of its kind.
***
The World Food Programme uses overland routes from northern ports for delivering aid to central areas of the country as roads from the capital, Mogadishu, are too dangerous.

"Pirates" generally require water, but the point is well made. These thugs have little respect for their fellow Somalis since they are literally going to put a stop to the flow of food for hundreds of thousands of people. WFP ships already have to be escorted to flow the food to Somalia because of these same criminal gangs and others in the south of Somalia who have so endangered the WFP drivers and trucks that food flow has virtually halted as set out here:


Rising threats and attacks on humanitarian operations, as well as the imposition of a string of unacceptable demands from armed groups, have made it virtually impossible for WFP to continue reaching up to one million people in need in southern Somalia.
WFP's humanitarian operations in southern Somalia have been under escalating attacks from armed groups, leading to this partial suspension of humanitarian food distributions in much of southern Somalia.
WFP is deeply concerned about rising hunger and suffering among the most vulnerable due to these unprecedented and inhumane attacks on purely humanitarian operations.
WFP is continuing to provide life saving food distributions in the rest of the country, including the capital, Mogadishu, reaching more than two-thirds of the hungry it has been targeting - or 1.8 million people.  In addition, resources and relief workers are being re-deployed from southern areas in the event that people start moving away from areas where food distributions have been suspended.

Then there are the "rebel groups" who have banned WFP aid from their "territories": 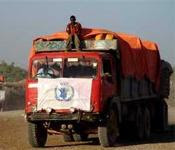 The al-Shabab Somali rebels have announced a ban on World Food Program operations, which were already suspended in rebel-controlled territory earlier this year due to "unacceptable" demands from the Islamist militants. A senior U.S. official says that al-Shabab, not the U.S., is the one "politicizing" aid to the country.

In January the WFP announced it was ending food aid to al-Shabab controlled areas after the group demanded, among other things, that all food be locally-bought and that the organization pay a $20,000 tax twice a year to the militants.

On Sunday the rebel group announced that it was formally banning the food aid organization, saying that the assistance meals destroy the livelihood of local farmers. It also accused the group of "covert" political motives.

Hungry masses are so much easier to control and subvert.

Some of you may remember the early 1990's attempts to feed starving Somalis that was rent asunder by similar behavior, but if not, see here for a UN summary:


The United Nations Operation in Somalia (UNOSOM I) was set up to facilitate humanitarian aid to people trapped by civil war and famine. The mission developed into a broad attempt to help stop the conflict and reconstitute the basic institutions of a viable State. Somalia occupies a strategically important geopolitical position at the Horn of Africa. The political culture is influenced by competition among a number of clans and clan-based factions.

From November 1991, there was heavy fighting in the Somali capital of Mogadishu between armed elements allied to General Mohamed Farah Aidid, or to Mr. Ali Mohamed Mahdi, the appointed "interim President", and yet other factions. In addition to Mogadishu, there was conflict in Kismayo, and in the north-west, local leaders were pushing to create an independent "Somaliland". The country as a whole was without any form of central government. Banditry was rife.

The fighting that followed, with clans and sub-clans constituted in loose alliances without central control, took place at a time of serious drought. That combination proved disastrous for the population at large. By 1992, almost 4.5 million people, more than half the total number in the country, were threatened with starvation, severe malnutrition and related diseases. The magnitude of suffering was immense. Overall, an estimated 300,000 people, including many children, died. Some 2 million people, violently displaced from their home areas, fled either to neighbouring countries or elsewhere within Somalia. All institutions of governance and at least 60 per cent of the country's basic infrastructure disintegrated. 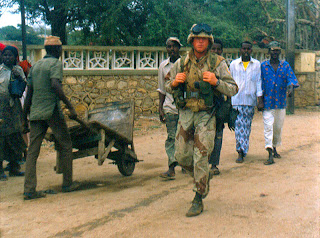 This, of course, lead to Blackhawk Down.

Odd how nothing much changes in Somalia. Still got starving masses, warlords and no government.