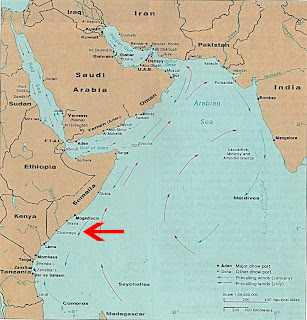 Yesterday I put up a post about 7 Indian dhows being captured off the coast of Somalia and noted this:


Why the vessels were operating, apparently unescorted, so near pirate-infested waters is not clear.

Now, thanks to the Voice of America in an article by Steve Herman, Hijacked Indian Vessels Put Focus on Illicit Maritime Trade, there may be an explanation - old-fashioned smuggling:


The vessels, all under 400 tons each, are based out of several ports in India's Gujarat State. Reports say the missing ships had been visiting the rebel-held port of Kismayo in Somalia.
***

[Indian] Navy spokesman Commander P.V.S. Satish tells VOA ship operators are reluctant to inform authorities their crews have been hijacked.
"I think it would probably be for fear of the fact that they would be prevented from going to these area and that would affect their livelihood. Sometimes it has happened in the past that we come to know much later that such an incident has actually happened," said Satish.
The dhows are part of a centuries-old tradition of Gujaratis trading between the African east coast and the Arabian Peninsula.
A Germany-based environmental group, Ecoterra, accuses the Indians of exporting charcoal and other contraband from the port to Dubai. It says the Indian fleet also may be involved in other criminal activity, such as human trafficking and delivering drugs and weapons.
Taking charcoal from Somalia to meet demand in the Gulf States is a lucrative, but illegal, trade blamed for deforestation in Somalia.

The map shows normal dhow ports around the Indian Ocean. The red arrow points to the port of Kismayo (Chisimayu on the map). 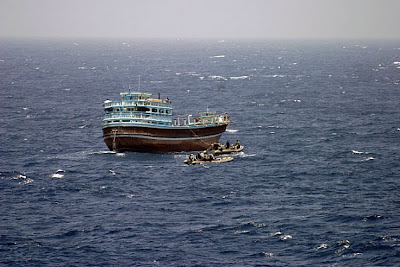 A sample of a typical dhow is shown in the photo. Photo caption: