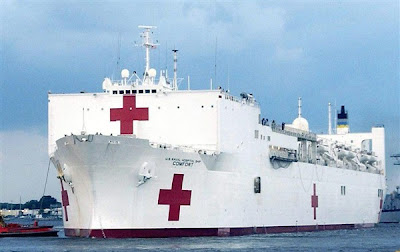 USNS Comfort, one of two  massive hospital ships of the U.S. Navy, is coming home:

Over the course of seven weeks, the ship's U.S military and civilian medical personnel treated 871 patients, receiving at the height of the recovery effort one patient every six to nine minutes. But now, thanks to more field hospitals ashore and fewer patients in need of specialized care, the ship has not had patients on board for more than a week.

Comfort departed its homeport in Baltimore Jan. 16, and arrived three-and-a-half days later and immediately began supporting humanitarian relief efforts in Haiti. Prior to anchoring off the coast of Port-au-Prince Jan. 20, Comfort was already receiving patients in transit via airlift. During portions of the relief effort, nearly 1,300 medical personnel from the U.S. military and various non governmental organizations (NGOs) were embarked and treating earthquake survivors.

Medical personnel aboard Comfort performed 843 surgeries during their mission in Haiti. According to the ship's Director of Surgery, U.S. Navy Cmdr. Tim Donohue, Comfort had more than 540 critically injured patients on board within the first 10 days. During the initial phase of its mission, the ship ran 10 operating rooms at full capacity to care for severely injured earthquake survivors. The ships medical crew also delivered nine infants during the relief mission.

Patients treated aboard Comfort included injured Haitian and U.S. earthquake survivors, as well as U.S. and international military personnel transferred to the ship by physicians on the ground for surgical and non-surgical care.

Apparently not everyone understands that Comfort was provided for "emergency service" - as set out in this article:


The need for Comfort's capabilities declined significantly during the final weeks of its mission, as medical facilities and field hospitals in Haiti assumed a greater role addressing the health care needs of Haitians," officials said in a statement released Tuesday by the U.S. Southern Command, which oversees American military operations in Haiti.

Yet doctors who have worked at some of those field hospitals are calling the ship's departure premature.

When it sails away today, they say, the Comfort will take with it the only modern, well-equipped treatment facility available to most of the island's struggling population.

Dr. Andrew N. Pollak, a University of Maryland orthopedic surgeon who returned from Haiti recently, described military and civilian doctors in Port-au-Prince scrambling last weekend to find treatment for a patient with a potentially life-threatening injury - while the Comfort sat empty in the harbor, preparing to depart.

"They're just completely punting," Pollak said of Pentagon officials who decided to pull the ship out of Haiti.

"Without the Comfort, the country is going to have no critical-care capability to speak of," he said.
***
Meanwhile, relief workers have encouraged the Navy to leave the Comfort in Haiti, even offering to staff it with civilian physicians, nurses and technicians. Pollak was among a group of key civilian doctors who appealed directly to top officials at the Pentagon.

"You can't expect the Comfort to bring the entire country up to the standards of the U.S. health care system, but there has to be some bailout capacity," Pollak said.

Military physicians say privately that the Haiti relief mission was complicated by the endless need for advanced care for patients whose conditions were unrelated to the Jan. 12 disaster.

In Haiti primarily to treat fractures and crush injuries from the earthquake, the crew was inundated with patients suffering from diseases, heart trouble, infections and other ailments that owed more to the country's lack of development than to the earthquake.

Navy officials declined to address questions about the continuing health care needs in Haiti, while praising the Comfort's accomplishments over the past seven weeks. (emphasis added)

The distinction between emergency service and becoming the "critical care" health service of Haiti on a permanent basis almost defines the difference between "disaster relief" and "nation building." Or, as they say in the disaster management business, the move is an indication that the shift has come from the "response" phase to the "recovery" phase.

Email ThisBlogThis!Share to TwitterShare to FacebookShare to Pinterest
Labels: Disaster Logistics, Disaster Relief from the Sea