The Turkish frigate "Gemlik" has encountered a small skiff in the Gulf of Aden, and captured seven alleged pirates. 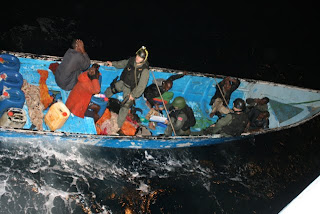 The naval vessel, which is serving under an international mission to fight off piracy in the Gulf of Aden, encountered a suspicious boat in the security corridor used by commercial shipping, some 60 kms offshore.
Turkish SAT Commandos (the Underwater Assault Team) boarded the small boat and seized the seven men, along with an assault rifle and equipment used in pirate operations, according to the Turkish Military Headquarters web site on Saturday.
The group has been detained, suspected of preparing to launch attacks on commercial vessels in the area.