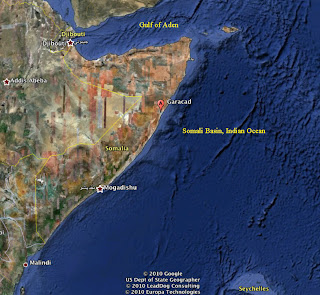 19 crew members from a small Iranian cargo ship, SAAD 1 are now free from their pirate captors after being held for 5 months. Their release followed intervention by the Italian warship ITS Scirocco, one of five NATO warships operating in the region as part of NATO’s counter piracy mission, Operation Ocean Shield.

The Commanding Officer of ITS Scirocco, Cdr Massimiliano Giachino said:


“The success of this operation demonstrates the professionalism and determination of the crew of Scirocco in combating piracy. SAAD 1 is now free and we have provided assistance to the crew to ensure their safe return home.”

Captured by Somali pirates 5 months ago the vessel has been prepared to act as a mothership to attack merchant traffic transiting the busy international waters in the Indian Ocean.

SAAD 1, with its crew under the control of pirates, sailed from Garacad on 14th March. ITS Scirocco who had been tasked to monitor pirate camps along the coast quickly took up the trail. On 16th March, once the presence of pirates had been established, ITS Scirocco forced the SAAD1 to return to the coast where it could no longer pose a threat to legitimate seafarers.

Late on 17th March as soon as the dhow arrived at the coast, the pirates fled with the NATO ship still close by. Seizing the opportunity, SAAD 1 then rapidly escaped with ITS Scirocco providing protection as the pirates fled on shore.

Both ships then proceeded into safe water where the crew of ITS Scirocco rendered assistance to the help prepare the vessel and her crew for their journey home.

“This is excellent news. Scirocco’s actions today send a very strong message to the pirates that NATO and other counter piracy forces are willing to do what is necessary to stop piracy – even if it means tackling the pirates in the vicinity of the pirate camps.”

Background (also from the press release):


1. The NATO task force TF 508 conducing Operation Ocean Shield is one out of three coalition task forces operating in the fight against piracy. TF 508 consists presently of five ships:

2. At the request of the UN in late 2008, NATO started to provide escorts to UN World Food Programme vessels transiting through the Somali Basin. This operation has now been succeeded by Operation Ocean Shield, which as well as deterring and disrupting pirate activity additionally offers training to regional countries in developing their own capacity to combat piracy activities.
3. NATO is conducting counter-piracy activities in compliance with UN Security Council Resolutions (1816, 1838, 1846, 1851 and 1897) and in coordination with other international actors including the European Union.
4. Scirocco assisted the dhow by repairing the ship’s radio, providing 1000 litres of fuel as well as sufficient food and water for the voyage to its next port of call.