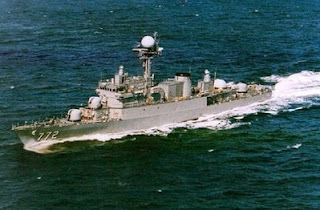 "Initial reports of almost any event are nearly always wrong," the military saying goes. As shown yesterday, there were already conflicting reports of what caused a Republic of Korea (that's South Korea) coastal patrol ship to sink off a South Korean Island that sits about 10 miles off the beaches of the Democratic Peoples Republic of Korea (aka North Korea).

Confusion still seems to be the rule, as seen in this report from The Korea Herald:


A survivor from the sunken naval patrol ship Cheonan on Saturday raised the possibility of the 1,200-ton vessel sinking due to an attack from an outside force. 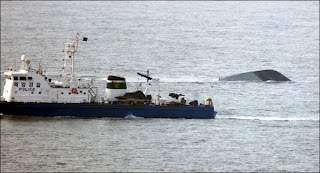 “There is no possibility whatsoever that the ship sank due to an internal explosion or a collision with a reef. I guarantee that,” a navy lieutenant was quoted as saying by participants in a briefing session organized by the Navy’s Second Fleet Command in Pyeongtaek, Gyeonggi Province -- the home port of the ill-fated ship.

“Another cause could be an attack from an outside force and that is not exact as of yet. The military is currently conducting an investigation and I am not in a position to comment on that,” he added.

About 300 relatives of the 46 missing sailors from the sunken ship attended the session, which was not open to the press. The vessel sank in waters near the western maritime border with North Korea at around 9:45 p.m. on Friday after an explosion ripped a hole in the rear bottom of the ship.
***
Fifty-eight sailors have so far been rescued. Thirteen of them suffered injuries and are now being treated at hospitals. No one is in critical condition, officials said.

In another briefing session held in the afternoon, commander Choi Won-il, who led the sunken ship, said the explosion appears to have been caused by “internal or external shocks.”

"Before" photo supplied by ROK Navy, "after" photo is from The Korea Herald.

The blog One Free Korea has thoughts (in an update):


It might just be that the South Koreans don’t know if they ran over one of their own mines. On the other hand, it might also be that President Lee does know and still hasn’t decided what he’s going to do about it. He might be hiding behind those doubts to give people a chance to calm down before he announces his decision.


North Korea's possible involvement was initially suspected, but Seoul government officials said it was premature to draw any conclusions.

"It is hard to say for sure now, but chances appear to be slim that North Korea was related," a senior official said, speaking on the condition of anonymity. "If North Korea's attack really caused the sinking, it means there is a serious loophole in our defense system."

Navy divers had planned to go underwater to search the sunken craft Cheonan which officials said is protruding from the shallow waters about 24 meters deep, but the effort was hampered by inclement weather.