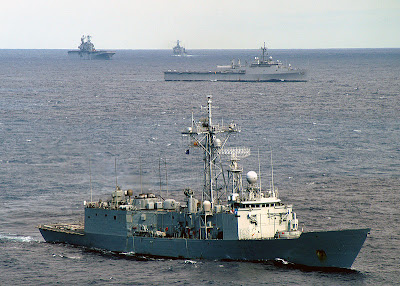 From the EU MSC (HOA) report:


On 19th March the EU NAVFOR Spanish warship NAVARRA was dispatched by the Force HQ (ITS ETNA) to assist an Iranian dhow that had sent out a distress call.

The Iranian fishing dhow, named UAID 400, with 13 crew members, had suffered a pirate attack some days before and had been left without food, water or sufficient fuel to return to shore.

After a high speed dash, the NAVARRA's helicopter located the dhow early the following morning, 60 NMiles from its last known position. The crew were seen on deck waving their arms and making desperate signs for help as the helicopter approached them.

Once EU NAVFOR warship ESPS NAVARRA arrived in the vicinity of the dhow, a boarding party was sent onboard and confirmed that the fishing vessel's radio equipment was broken and their mobile phones were not working. The crew were already drinking sea water and there was no food onboard. The crew confirmed that it had been four days since the attack.

The fishermen reported that the pirates had kept them tied up for two days without food or water. When the pirates left they looted the vessel and also took the crew's possessions.
The NAVARRA provided the crew with sufficient food, water and fuel to ensure that that they could make it back to the nearest harbour. The Iranian crew, who are now all well, were extremely grateful for EUNAVFOR's quick reaction to their distress call that clearly saved their lives.

Navarra is based on the U.S. Perry class frigates, but is Spanish built. 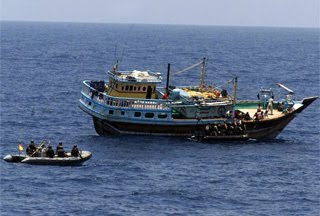 The 13 Iranian crewmembers onboard had been tied up for two days without food or fresh water, after the sea bandits had broken radio equipment, CNN reported, adding that their mobile phones were also dysfunctional.
Before the rescue on Saturday, the dhow had sent out a distress call 60 nautical miles from where it was discovered.