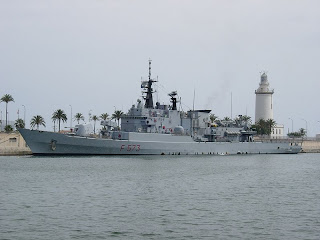 Somali pirates seemingly are going all wimpy because both NATO and the EU are stepping up their anti-pirate activity, a trend evidenced by this report Somali pirates release hijacked vessel after encountering Italian warship - Winnipeg Free Press:

Shona Lowe, a NATO anti-piracy spokeswoman, said the SAAD1 transport was released near the port of Garacad on Somalia's Indian Ocean coast, where it was hijacked five months ago and had been anchored.

It was unclear why the pirates set sail on Sunday in their captured ship, but they encountered the Italian frigate Scirocco which was patrolling nearby. On Thursday, the hijackers abandoned the Iranian ship and returned to Garacad in a dinghy, Lowe said.

"Because our ships are there, the pirates no longer have the freedom they had in the past," she said. "There was no fire fight. It was the presence of the Italian ship that made them leave."