Haiti Logistics: What the DLA Did

An under-reported story behind the U.S. military aid to Haiti concerning the Defense Logistics Agency as told by the - DLA's Sara Moore: 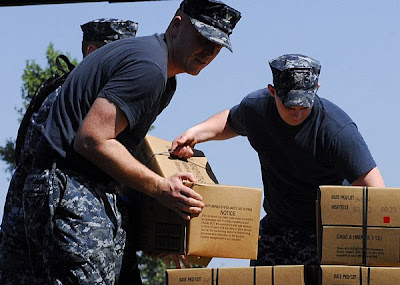 Immediately after the quake hit, DLA began coordinating with USSOUTHCOM, which had partnered with the State Department and U.S. Agency for International Development to assess the need for humanitarian support. In the following weeks, DLA deployed a support team to Joint Task Force Haiti, and the Agency’s field activities worked around the clock, filling hundreds of thousands of requests for ready-to-eat meals, bottles of water, medical supplies, health and comfort items, fuel, maps, repair parts for military equipment and construction materials.

Additional DLA representatives were aboard the Navy hospital ship USNS Comfort, and others worked with USSOUTHCOM in Miami, including members of DLA’s Joint Contingency Acquisition Support Office who helped establish a contracting office and evaluate contracting approaches.

In addition to providing food, DLA sourced construction material in support of Port-au-Prince pier reconstruction. DLA also provided hundreds of tents and cots to Naval Station Guantanamo Bay, Cuba, which was used as a hub for humanitarian supplies headed to Haiti.

Defense Supply Center Richmond, Va., provided more than 68,000 maps and charts for U.S. forces operating in and around Haiti, and additional tie-down straps that were used to secure loads on aircraft and helicopters as they flew supplies into Haiti.

The Defense Distribution Center’s Supply Chain Transportation Division ran an around-the-clock operation to support disaster-relief efforts in Haiti. DDC SCT is responsible for coordinating transportation requirements for the DDC’s vendor base, including providing carriers, documentation and guidance as freight moves to its destination.