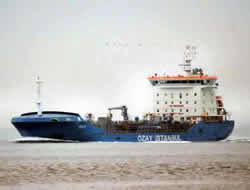 An attack on March 25 off Nigeria reported here:

Eight to 10 pirates with automatic weapons boarded the Ozay 5 late Thursday. They robbed the crew of money and cellphones but fled after the ship began making distress calls.

The ship's cargo was not damaged in the attack.

Two of the injured crew were Turkish and one was Nigerian, Anatolian quoted the Turkish Maritime Undersecretariat as saying.