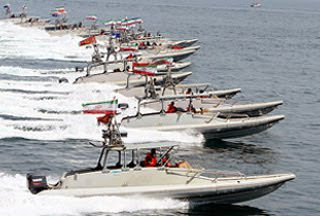 Iran reports on its "Great Prophet 5" war game wrapping up in the Persian Gulf waters off its coast.

The drills reveal that Iran's sea-side defense is built around a combination of missiles, mines and swarm attack small boats, including an alleged missile firing remotely controlled "sonar-evading" boat as set out in IRGC unveils homemade vessel: 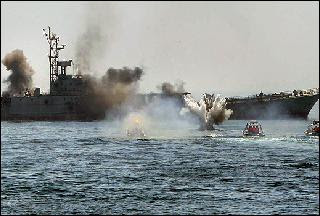 High-intensity rockets launched by remote-controlled Ya Mahdi vessels are able to destroy any targets on water surface, added the top commander, quoted by IRNA.

Over 300 vessels equipped with torpedo and guided-missiles are taking part in the massive naval maneuvers that coincide with the 31st anniversary of IRGC's formation.

Iran asserts its forces can cover the entirety of the Persian Gulf (see here). The Gulf is about 600 miles long and, at most, a couple of hundred miles wide. Of course, Iran cannot claim ownership of the entire Gulf, since it shares it with Iraq, Kuwait, Saudi Arabia, Bahrain, Qatar and the UAE.

Exercises included mine laying and other exercises as set out here:


The Islamic Revolution Guards Corps (IRGC) has wrapped up the third phase of a major military exercise in the Persian Gulf and the Strait of Hormuz after the US threatened Iran with a nuclear attack.

Codenamed the 'Great Prophet 5', the massive air, land and naval maneuvers kicked off on Saturday with the main aim of preserving the security of the region.

Phase three of the war games carried out on Saturday focused on defending the Persian Gulf coasts and islands, featuring anti-heliborne attacks and asymmetrical war tactics.

Missile tests are included in the festivities:

Iranian “defense experts have upgraded and improved the power and range of the missiles, and we will witness their capabilities in the new phase of the maneuvers,” Fars News Agency quoted Saffari as saying.

The senior commander identified one of the missiles as Nasr — a short-range cruise missile that can be launched from both inland bases and military vessels.

Earlier in the day, IRGC Air Force Commander Amir Ali Hajizadeh announced that Iran's 'stealth' drone, Pehpad, was scheduled to become operational in the second half of this year.

Commander Hajizadeh added that the radar-evading unmanned aerial vehicle, which is capable of bombing and conducting reconnaissance missions, had played a successful back-up role in the ongoing military drills.

Naturally, all of this is done in the name of peace. In the meantime, the IRGC has thrown its weight around by stopping foreign-flagged merchant ships in the Strait of Hormuz for "environmental inspection" as set out here:


The Islamic Revolution Guard Corps' naval patrol units have stopped an Italian and a French vessel in the Strait of Hormuz and inspected them.

The two vessels were inspected by the IRGC forces during a military maneuver on Friday for verification that they complied with environmental regulations.

The vessels were allowed to continue sailing after confirmation that they had not breached any regulations, the Islamic Republic News Agency (IRNA) reported.

The IRGC has been holding the third day of a major military exercise dubbed 'Great Prophet 5' in the Persian Gulf and the Strait of Hormuz. 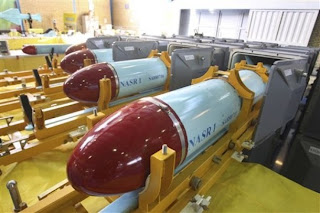 According to some reports, the Iranian NASR missile is a version of the Chinese C-704 anti-ship missile and China has opened a C-704 plant in Iran:


China inaugurated a missile plan in Iran last month, even as the United States and its allies were pressing Beijing to support a new round of tough economic sanctions on the Islamic Republic over its nuclear program, Jane's Defense Weekly reports.
***
The Nasr is identical to China's C-704 anti-ship missile, Hewson says. Iran's burgeoning defense industry, much of it controlled by the Islamic Revolutionary Guards Corps, has been producing Chinese-designed anti-ship missiles such as the C-801 since the early 1990s.

You might notice in the photo above the NASR comes with its very own box launcher, suitable for shipboard use and land launchers. You might enjoy this post from 4 years ago in Iran's radar evading missiles. As noted in this DefenseTech post you can get an unclassified intelligence estimate of Iran's military strength here (pdf). From which this highlight:


Coastal defense cruise missiles (CDCMs) are an important layer in Iran’s defense of the Persian Gulf and Strait of Hormuz. Iran can attack targeted ships with anti-ship cruise missiles (ASCMs) from its own shores, islands, and oil platforms using relatively small mobile launchers.
The C801/802 is Iran’s primary CDCM, first imported from China in 1995. It is capable of engaging targets at a range of six nautical miles, and has greater accuracy, a lower cruising altitude, and a faster set-up time than the Seersucker missile Iran used during the Iran-Iraq War. The C801/802 allows Iran to target any point within the Strait of Hormuz and much of the Persian Gulf and the Gulf of Oman. Iran has worked with China to develop shorter range missiles, including the C701, for deployment in narrow geographic environments. 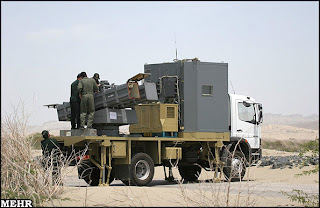 Iran can readily deploy its mobile CDCM launchers anywhere along its coast. These systems have auto control and radar homing guidance systems, and some can target using a remote air link. Iran’s objective is to overwhelm enemy air defenses with mobile CDCMs, combined with multiple rocket launchers (MRLs), coastal artillery, and ballistic missiles.


A senior commander of the Islamic Revolution Guards Corps (IRGC) announced on Sunday that his forces plan to mass-produce a new home-made Unmanned Aerial Vehicle (UAV) tested during the current wargames in the Persian Gulf and the Strait of Hormuz. 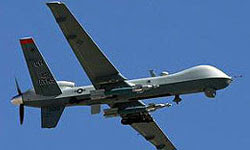 Speaking to reporters on the sidelines of the last stage of IRGC naval exercises, codenamed as Payambar-e Azam (The Great Messenger) 5 in Iran's southern waters today, Commander of the IRGC Aerospace Force Brigadier General Amir Ali Hajizadeh said that the new UAV (Pahpad) will be mass-produced in the near future.

"In addition to reconnaissance flight over the operation (battle) field, this kind of drone brings ease to battle command by transferring real-time data," Hajizadeh added.

Judging by the photo accompanying the article, one approach to "stealth" will be to make the Iranian drones look exactly like U.S. "Predator" drones, right down to the U.S. markings on the fuselage . . .that's so . . . asymmetric. 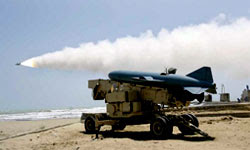 UPDATE2: Another article on Iran's homemade missiles here, this time with a photo of an older "Silkworm" type ASM on the beach.

Of course, that reminds of another post from 4 years ago setting out Silkworm range from Iran's shore here. As I recall, the pink areas are within Silkworm range in the lower Arabian Gulf. Sorry to say, all the source info for the map seems to have dried up. 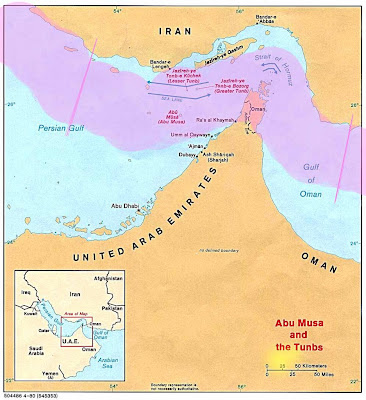