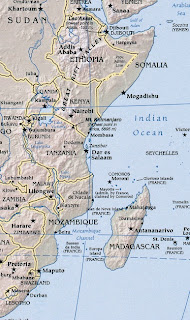 Or, as the BBC puts it, "French woman kidnapped in Kenya resort":


A French woman has been kidnapped by an armed gang on Kenya's northern resort island of Manda, officials say.

The elderly woman - who is said to be disabled - was attacked at a rented thatched bungalow at Ras Kitau.

Witnesses said they heard shots being fired before the woman was taken away in a motorboat.

Najib Balala added that the attackers were firing into the air - apparently to try to scare off the vessels.

A police helicopter is also taking part in the rescue operation.

Whether the attackers are Kenyan, Somali or some combination thereof, they are certainly among the scum of the earth.
Posted by Mark Tempest at 10/01/2011 05:51:00 AM